November 3 through 17, 2006, the Tampa Bay Chapter of AIA is presenting their second annual Archifest,a celebration of architecture in the Tampa Bay area. Here's your chance to give input on the redevelopment of West Tampa, to visit architecturally distinctive modern homes and the restored Tampa Theatre, and go on an architectural history tour of Tampa. RSVP required for some events, so be sure to check out the event's calendar ahead of time.
Posted by Lucy D. Jones at 10/31/2006 No comments:

I’ve been doing some research involving a piece of property near the Celery Fields in Sarasota County. This is a part of the county that was marshy, mucky, and wet land up until the 1920s.

To avoid the cold Chicago winter of 1910, Berthe Honoré Palmer visited Florida. She was the widow of a wealthy Chicago businessman, and she became a successful businessman in her own right. During her winter visit, Palmer became interested in buying very large tracts of undeveloped land, and started the Sarasota-Venice Company to manage and re-sell her property. After her death, her sons Honoré and Potter dug miles of canals to drain large sections of muckland. The Palmers then sold parcels to individual farmers, who then became members in an agricultural cooperative known as the Palmer Farms Growers Association. These farmers had particular success growing celery.

Celery has uses other than as a crudité or in turkey stuffing. In the early twentieth century, Celo was a popular celery-flavored soft drink in Florida. W. Truman Green came up with the original concoction in a Tampa drug store in 1915. The Celo Company prospered in the 1920s with the support of local investors and stockholders. Unfortunately, the company struggled through the Great Depression and never quite made it as big as Coca-Cola or Pepsi. Vernor’s Ginger Ale owned Celo in the 1940s, but the drink hasn’t been seen for many years. (Source: Sarasota Herald-Tribune, September 11 and 18, 1996).

After World War II, Florida experienced a population boom, and the agricultural lands at Palmer Farms were gradually sold to developers. The celery fields became suburbs. In the 1990s, as a way to control flooding problems in the Phillipi Creek watershed, Sarasota County built the Celery Fields Regional Stormwater Facility . The Celery Fields are also popular with local bird watchers.
Posted by Lucy D. Jones at 10/27/2006 1 comment:

This Saturday, October 28, is the 14th annual St. Petersburg Times Festival of Reading on the University of South Florida-St. Petersburg campus. It's a great opportunity to meet and hear Florida authors speak about their writing!
Posted by Lucy D. Jones at 10/26/2006 No comments:

At 8 A.M. this morning, Progress Energy's A. W. Higgins Power Plant in Oldsmar crumbled into a pile of rubble. Since 1954, the power plant had been a prominent feature on the shore of Old Tampa Bay and Safety Harbor. The plant closed in the 1990s, and the power company chose to demolish the structure.

I was lingering over a cereal bowl miles away when I heard the rumblings. At first I thought it was our temperamental pool pump, or perhaps an airplane making a low turn. Our cat abandoned her customary morning lizard hunt and scurried indoors in a fluff.

It's a spectacle when big buildings come down. Today's implosion reminded me of the old (1967) Tampa Stadium (a.k.a. Houlihan Stadium, or more affectionately, the Big Sombrero), which gave way to the new Raymond James Stadium in 1998, and the historic Soreno Hotel in St. Petersburg, which gave way to a shopping center in 1992. You can see the demise of the Soreno in the movie "Lethal Weapon III," which also features the implosion of the 1958 Orlando City Hall building.
Posted by Lucy D. Jones at 10/20/2006 No comments: 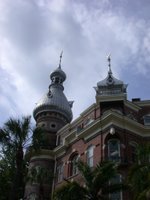 Recently I took a class (USF St. Petersburg Honors Program) on a field trip to the Henry B. Plant Museum in Tampa. The museum is in one wing of what was originally the Tampa Bay Hotel.

The Tampa Bay Hotel was part of an elaborate 1880s resort built by Henry B. Plant, a Connecticut native who made a fortune building railroad networks throughout the South and Florida. Tampa was the southern terminus of his South Florida Railroad. From Tampa, passengers could travel to Key West, Havana, or other Caribbean ports on a Plant steamship.

Whether inspired by the great northern resorts, or by the success of Henry Flager's hotels and railroads on the east coast of Florida, Plant built an elaborate and massive Moorish Revival hotel on the shore of the Hillsborough River. The hotel was much more of a destination than the town itself, but Plant put Tampa on the world scene.

The Tampa Bay Hotel was never a complete success, but thousands of people came to see it. In 1898, when Tampa became the Army's port of embarkation for the Spanish-American War, the hotel was packed to the rafters with officers and journalists. The hotel was eventually sold in the early 20th century, and in the 1930s became part of the University of Tampa
campus.

The Henry B. Plant Museum is a good field trip experience for grade school through college age students. It is also a good family-oriented cultural site near downtown Tampa. Check their website for directions and a calendar of events.
Posted by Lucy D. Jones at 10/20/2006 No comments: 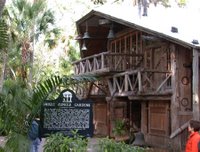 Waldo Sexton was many things in his life -- farmer, realtor, developer, promoter, artist -- but always a man led by his own visions. Although elemental in the development of Vero Beach, Sexton is best remembered today as a man who could take what others threw away and turn it into something worth saving.

Waldo Sexton came to Florida as a traveling farm equipment salesman, and stayed to sell Florida to anyone who would listen. He sold land, and oranges, and adventure.

While all people have creative impulses, these urges were larger and brighter in Sexton than for the average person. Waldo was an incuarable collector. No matter where he traveled, around the state, country, or world, he bought antiques, bells, wood, architectural salvage, and anything that caught his eye. With these materials he created one-of-a-kind buildings, many of which still stand in Vero Beach, and are open to the public.

The Driftwood Inn started out as a beach house, but became a hotelrun by the Sexton family. The miscellany that has made up the Driftwood over the years includes a bell from Henry Flagler's train, mastadon bones, stair railings fromt he Royal Poinciana Hotel, iron grillwork from the Dodge Estate in Palm Beach, a bell from Harriet Beecher Stowe's house -- pieces of Florida.