The Castor Bean plant grows quickly and easily in Florida, has been grown commercially here in the past, and is used in Brazil to make biodiesel fuel. Sounds great, sign us all up, the answer for what to do with all that land cleared due to citrus canker -- well, maybe not. The plant is invasive and poisonous, one of its products being ricin. Nonetheless, 90 years ago castor cultivation in Florida was a matter of national concern.

The time was 1917, and the United States had joined World War One. One of the inovations of the Great War was the use of airplanes for military purposes, and castor oil was valued as an aircraft lubricant. Soon the plant was under cultivation in Florida, the southwestern states, and California, with growers guaranteed a price of $3 a bushel. Problems with labor, pests, and transportation lowered yields and raised prices demanded by growers. Production was far below government estimates, and the War Department turned to foreign sources of the oil. American petroleum companies promoted mineral and other oils for use in aircraft.

Soon after fields of castor were planted in Florida, armyworms began marching and munching their way through the foliage. State plant inspectors waged battle armed with dust sprayers full of powdered arsenate of lead, quickly saving that year's crop. The State Plant Board reported:

"In dealing with the emergency created by this outbreak of the army worm the Plant Board was called upon to make rather heavy expenditures. A total of $1,946.85 was expended by the Board, covering traveling expenses of inspectors, telegrams, emergency circulars, dusting machines, poison, etc. The large quantity of castor beans saved from destruction, and therefore made available for the use of the Government, more than justified the expenditure."

The war ended before all problems with massive domestic production of castor oil were resolved. Peacetime demand for the oil much less, and farmers turned to other crops. Castor bean plants are still found along roadside ditches and fields throughout south Florida, where they are considered weeds.

Photograph on page 304 of the 1918 edition of The Overland Monthly: "Human and Physical Elements in a Picturesque and Successful Castor Bean Campaign in Florida. --Herman B. Walker of Miami, and the illuminated Ford in Which He Several times Traversed the East Coast, Calling upon the Farmers to Plant War Beans."
-----

Friday night was a special night for the Tampa Bay (Devil) Rays. Their win over the Baltimore Orioles guaranteed the Rays a winning season, the first in the franchise's history. 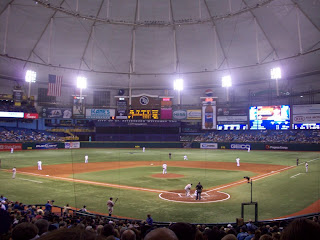 The Rays play at Tropicana Field, an air-conditioned indoor stadium. Not particularly romantic or glamorous, but immensely practical for Florida summers.
Posted by Lucy D. Jones at 8/30/2008 No comments:

Tucked away in Pinellas Park is the Tampa Bay Automobile Museum with 30+ collectible cars, many of which I had never heard of before. Such as: 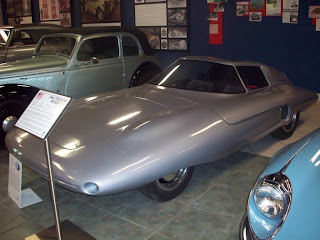 The 1962 Tiburon Roadster, designed by Henry Covington in St. Petersburg, Florida. According to the exhibit sign, this roadster (and its convertible version) are the only cars designed, built, marketed, and sold in the Tampa / St. Petersburg area.
And then there's the Hanomag Kommisbrot -- perhaps ancestral to the SmartCar? The Kommisbrot was built in Germany in the 1920s and got 60 miles to the gallon -- with a top speed of 35 miles per hour. Given the looks of this car, that must have been terrifyingly fast. 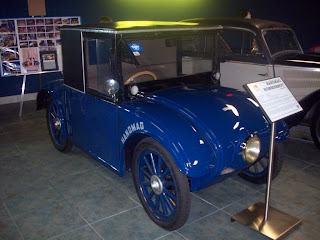 For more information about the Tampa Bay Automobile Museum, visit their website, http://tbauto.org/.

Stuff for a Rainy Day

While waiting for Tropical Storm Fay to pass on by...

"Winters in Fort Myers weren't always a wonderland for Edison" from News-Press.com, August 17, 2008

"The Master of Coconut Grove" from Modernism magazine

"Painter in a Savage Land: The Strange Saga of the First European Artist in North America" a book excerpt from the Wall Street Journal, July17, 2008
Posted by Lucy D. Jones at 8/18/2008 No comments: 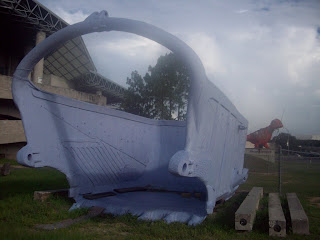 It's the shovel bucket from a dragline, used in Florida to mine phosphate. It's hard to tell from this picture, but this shovel is really big. You could walk around in there. Draglines and shovels like this were a tremendous step forward in efficiency compared to the handheld shovels and wheelbarrows used when phosphate rock was discovered in Florida in the 1880s. At first, miners dug for river-pebble phosphate, but draglines let them pull off the oveburden and get to buried phosphate rock deposits more easily.

Florida phosphate is a major source of fertilizer for the nation and the world, and has been economically important to the state for over 100 years. Downsides to mining are primarily environmental, from the actual soil removal to energy and water use, to the slightly radioactive by-products stored in mountainous gypsum stacks. Most of Florida's phosphate comes from the Central Florida Phosphate District or Bone Valley, where the corners of Hillsborough, Polk, Manatee, and Hardee counties meet.

This particular shovel can be found to the side of MOSI in Tampa. Yes, that's a red dinosaur in the background.