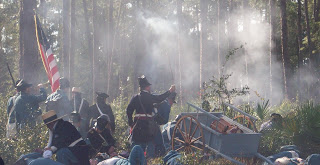 This past weekend was the annual re-enactment of Major Dade's last encounter with the Seminoles. One hundred seventy-two years ago, in December 1835, Major Francis Dade of the U.S. Army led 107 men out of Fort Brooke (now Tampa) to reinforce Fort King (now Ocala). While walking through piney woods and palmettos on December 28, they were unpleasantly surprised by over 100 Seminoles. After a day's battle, only three Army soldiers survived. Simmering tensions between the United States and the Seminoles became the long and costly Second Seminole War, which didn't end until 1843.
The Dade Battlefield Society hosts a re-enactment of the battle each December at the Dade Battlefield State Park near Bushnell, Florida. We went on Saturday, and had a great time. Parking was easy, with shuttle buses from a sports complex to the park entrance. The park is open year-round (not just during the re-enactment) and there are trails, picnic shelters, and a museum. The re-enactment doesn't take place on the actual battlefield, but in the park are several markers pinpointing key points ("Here Major Dade Fell") and the Battlefield Society has erected a replica of the small log barricade the soldiers built as a shield.
Before and after the battle (held promptly at 2pm), we wandered through the Seminole and Soldiers camps, where re-enactors explain the food, tools, and shelter of the time and place. In another area vendors offer a wide range of goods, some authentic to the event, some not.
An earthern mound creates ampitheather seating for the battle. The bleachers fill up fast, but there's pleanty of room for those with folding chairs or blankets. This re-enactment is a little different from others, in that the battle is narrated by Ransom Clark (one of the few survivors), with the assistance of a wireless microphone. The Seminoles come in first, and get into their places, waiting for the troops to walk into the ambush. There is gunfire, and cannon fire, and smoke, and soldiers falling artistically into what look like some rather uncomfortable plants. Horses gallop by, Indians whoop, and at the end it is quiet except for a bugler playing taps. When the battle is over, they drop the rope separating the audience and the players, and you can go meet the re-enactors, and ask questions. 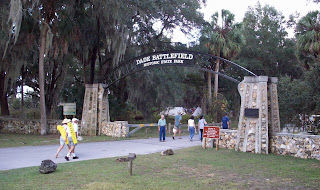 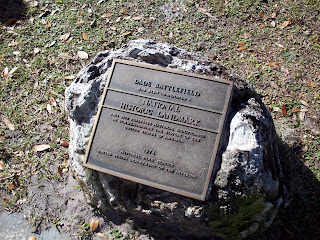 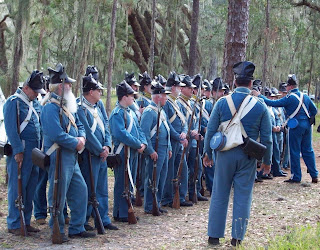 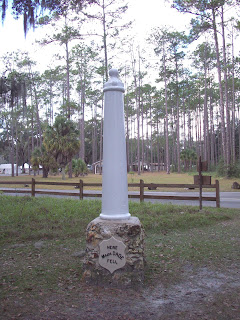 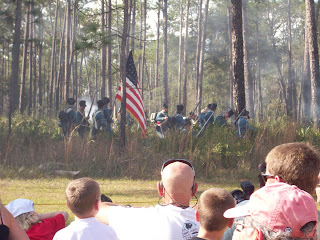 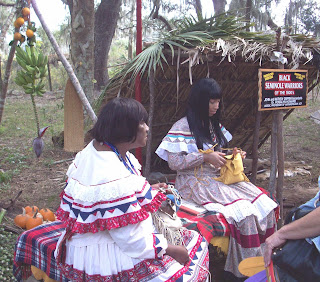 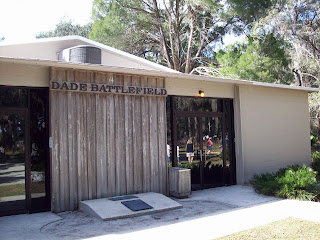 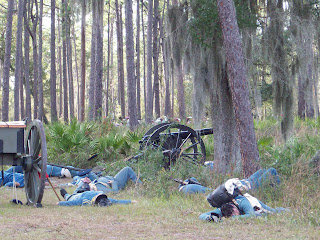 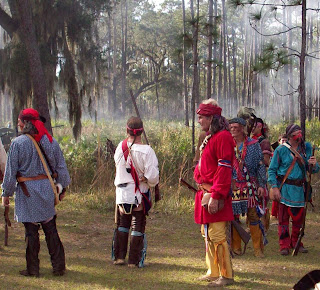 Historic Sites In and Around Tampa

The Tampa Tribune has been running a really nice series of stories about historic sites in the Tampa Bay area. Included have been:

On Christmas Day in 1837, a small Army fort was established in central Florida. Today, Fort Christmas Historical Park features a replica of the original Seminole War-era fort as well as other historic buildings such as a one-room school a several Cracker houses that were home to Florida pioneer families. The park is managed by Orange County Parks and Recreation.

The Christmas, Florida, postmark is popular with people mailing holiday cards and letters to Santa.

"In This Florida Town, Christmas is Year-Round Business" (Sun-Sentinel, December 18, 2007)

"Song picks won't have anyone leaving the show humming " (Daytona Beach News-Journal, December 14, 2007) "...the No. 1 requirement for a state song: A marching band must be able to play it."

"New study explores economic impact of Daytona International Speedway" (Orlando Sentinel, December 18, 2007) "The Daytona 500, considered the most prestigious race in the NASCAR circuit, had its first run in 1959."

Recent articles in the Tampa Tribune feature one of the photographs taken by Lewis Hine for the National Child Labor Committee. This 1913 portrait of a newsboy in Ybor City is one of many such images that elicited support for child labor laws in this country. Recently, Joe Manning has been tracing the stories and identities of the children Hine photographed, and this fall the Tampa Tribune published a story about Manning's search to find the newsboy ("Photos Expose Child Labor in Tampa," October 21, 2007). Tampa historians traced small clues, and found that the boy is probably Tony Valenti, son of Sicilian immigrants, who grew up to be a successul businessman ("Everybody Turns Out To Be Something," Tampa Tribune, December 8, 2007).

To see the National Child Labor Committee photographs from Tampa, visit http://lcweb2.loc.gov/pp/nclcquery.html and type "Tampa" in the search box. Or type "Florida" to see Hine's photographs from Jacksonville and Apalachicola as well.
Posted by Lucy D. Jones at 12/18/2007 No comments:

Looking for ideas of something to do with kids or visiting relatives during winter vacation? Go see some manatees! The Save the Manatee Club website lists places where you can see Florida's state marine mammal either in the wild or in capativity. As Gulf water temperatures drop, manatees seek warmer waters, so in the wintertime you are more likely to find them at natural springs or near power plants.

The University of South Florida Libraries Special Collections Department and the Florida Studies Center have several videos available on YouTube, including several oral history podcasts from the 2007 Florida Folk Festival, "Tabaco con Ideologia," "Eye of the Beast" (radical student culture at USF in the 1960s and 1970s), and an interview with Raymond More, owner of La Segunda Bakery in Tampa.
Posted by Lucy D. Jones at 12/14/2007 No comments:

The three finalists in the Just Sing Florida contest to select a new state song have been announced, and you can vote for your favorite online.

While reading this article ("Hear Here" by Eric Wills, Preservation Online), I was reminded of an article a while back in Creative Loafing, about a musician working on a project inspired by the sound of cars driving over the Cass Street Bridge in Tampa ("Take It to the Bridge" March 21, 2007). The soundfile links in that article aren't working for me, but a great time to listen to the bridge is during intermission of any nighttime performance at the Tampa Bay Performing Arts Center. Just walk outside towards the river, and you'll hear the car tires rolling out harmonic chords on the bridge's metal draw.
Posted by Lucy D. Jones at 12/11/2007 No comments:

The Pensacola News-Journal and the University of West Florida put together an interesting website with family stories of people buried in the historic St. Michael's Cemetery.

Researching St. Michael's Cemetery: Step Into Pensacola's Past
Posted by Lucy D. Jones at 12/11/2007 No comments:

"McCarty House fire was set by someone, but not sure if intentional" (TCPalm, December 5, 2007) 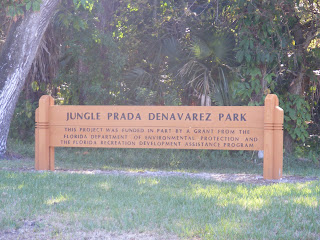 In the Jungle Terrace neighborhood of St. Petersburg, there is a small waterfront park at the corner of Park Street and Elbow Lane. The park has a boat ramp into Boca Ciega Bay, plenty of parking, and some short trails that seem fairly popular with fishermen. This bit of relatively undeveloped land is quiet today, but perhaps it's just resting, catching a breather, after a hectic few centuries. 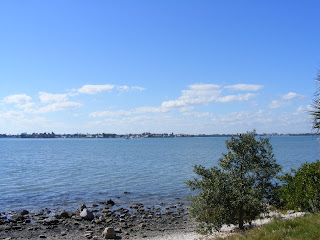 Nearby is the Narvaez / Anderson mound site, the former home of Tocobaga Indians. Here is where Spanish explorer Panfilo de Narvaez landed in 1528, on a rather disasterous journey along the Gulf coast. In the 1920s, this was part of the Jungle Prada complex, home to St. Petersburg's first nightclub. Stories abound concerning Al Capone's connections to this site. 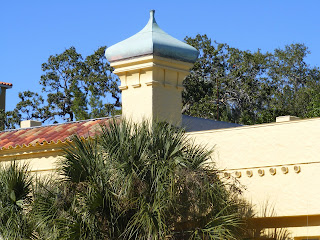 The Florida Maritime Museum in Cortez is opening this weekend. The museum exhibits, store, and offices are located in the historic and renovated Cortez Schoolhouse. The 1890 Burton Store has been moved to a site next to the schoolhouse and renovations are underway for its use as a classroom and research library.

The museum is a joint project between Manatee County, F.I.S.H. (Florida Institute for Saltwater Heritage), and the Cortez Village Historical Society. The museum's public grand opening is 9am - 4:30 pm Saturday, December 8.

Also associated with the Museum is a boatworking shop in Cortez, where volunteers restore historic craft and build new ones, including a 20' surf boat for the Jacksonville Volunteer Red Cross Life Saving Corps.
Posted by Lucy D. Jones at 12/06/2007 2 comments:

Tomorrow is the 60th anniversary of Everglades National Park. There will be ceremonies and exhibits, and discussion of where the park is headed next, with recent concern over the Restoration plan. The Park is also working on a plan, now in the public comment phase, for "re-establishing commercial services and facilites at Flamingo destroyed by hurricanes in 2005." Additional information about the Flamingo plan is available from the National Parks Conservation Association.
Posted by Lucy D. Jones at 12/05/2007 No comments:

I can't go to a museum without meandering through the gift shop, especially this time of year with all the seasonal goodies. Many museums shops sell crafts, decorative items, foods, stationery, toys, and books. These are great places to find a special gift, and make a purchase supporting local cultural institutions.

The best way to enjoy shopping is to visit the museum, then make a personal appearance in the store, but some museums have online catalogs for your convenience. I'm listing a few links here, but I haven't personally tested these museums' online services.

Orlando and Coral Gables have the same nickname, which led to a little trouble. Not that the two places are easily confused, but everyone likes to feel special. But why would two totally different cities pick the same, somewhat awkward name -- "The City Beautiful"?

For the same reason that many other cities across the nation chose it as well -- the name comes from the City Beautiful Movement, a Progressive reform movement of the late nineteenth and early twentieth centuries. As cities grew, so did the problems of urban life, such as poor sanitation and crime. Greatly simplified, the City Beautiful's proponents thought that a clean and attractive city would create more prosperity. Beaux Arts architecture typifies public buildings of this time and this movement. An early and particularly well-known expression of City Beautiful was Daniel Burham's White City at the 1893 World Columbian Exposition in Chicago.
Posted by Lucy D. Jones at 12/03/2007 No comments: