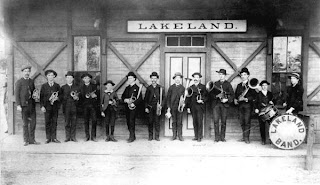 
Today, a U.S. president overlooks Florida at his own peril, but even before this state was a political battleground , our nation's leaders found their way here on a regular basis.

First was Andrew Jackson, who was Territorial governor of Florida before Florida was a state and before Jackson was president. Neither Jackson nor his wife Rachel were particularly fond of Florida, in fact, The Hermitage's website says that they "despised the climate."

Several places in Florida are named after presidents, including Polk County, which honors our 11th president, James K. Polk. Fort Pierce began as an actual fort, named after Lt. Col. Benjamin Pierce, the brother of President Franklin Pierce. The Herbert Hoover Dike holds the waters of Lake Okeechobee, and is named after the president who authorized the money to build the earthen dam after devastating hurricanes swepth through the Everglades in the 1920s. Manned space flights launch from the Kennedy Space Center, named after the president who challenged us to travel to the moon, not because it was easy, but because it was hard.

Dr. Mudd, who treated John Wilkes Booth's leg and was himelf accused of plotting against Abraham Lincoln, was held prisoner at Fort Jefferson in the Dry Tortugas. Fort Jefferson was named after our 3rd president, Thomas Jefferson.

Many presidents enjoyed fishing or hunting trips to Florida as breaks from the rigors of office. Several went as far as having second homes or "little White Houses" here - the Kennedy's had a family compound in Palm Beach, Nixon had a waterfront home on Key Biscayne, and Truman favored Key West.

So for all these presidents and more who have traveled to our sunny state, we wish you an Happy Presidents Day!
Posted by Lucy D. Jones at 2/15/2010 4 comments: