Somehow I missed this article a couple of months ago in the Orlando Sentinel: "Roadside signs light way to our community's past," which was accompanied by a map of Central Florida's Historic Signs.

The American Sign Museum in Cincinnati leads a nationwide effort to preserve these bulky relics, and the National Park Service's Technical Preservation Services division has written a booklet, Preservation of Historic Signs.

Historic Preservation, Sustainability, and Being Green

From the National Trust for Historic Preservation comes this article, "The Green Future of Preservation," discussing how the coming generation of historic preservations are learning how to combine preservation with sustainability.

"Preservation and Sustainability: The Greenest Building is the One Already Built" -- AIA's Newsletter of the Committee on the Environment

"The Greening of Historic Properties" (pdf)
White Paper from Green Building Alliance
Posted by Lucy D. Jones at 9/27/2007 No comments:

It came to my attention today that Florida doesn't have a state vegetable. State fruit, pie, beverage, flower, soil, freshwater fish, and many more, but no veggie. That's ok -- many states don't, and of the ones that do, two chose sweet potato, some picked tomatoes, and three selected some variety of onion. Utah added the State Historic Vegetable section (sugar beet), and Oklahoma started conversation by naming watermelon as its state vegetable.

Practically every vegetable under the sun is grown in Florida -- which would best represent this state? How about naming the state tree (Sabal Palm) as the state vegetable as well? That would be swamp cabbage (or hearts of palm, depending on where you are dining). However, since harvesting the cabbage kills the tree, you would need permission before using fresh swamp cabbage to make this recipe:

Outside My Office Door

Under tall pines and tangled with palms and muscadine vines, an American beautyberry bears fruit. The beautyberry's scientific name is Callicarpa americana. Birds enjoy the berries straight off the bush, but people make jellies and jams. 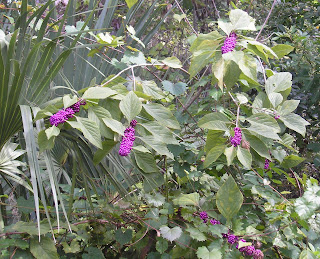 Pretty, but not welcome in these parts, is the Caesarweed (Urena lobata). It looks fairly quiet, but it's an invasive exotic plant, considered a noxious weed. 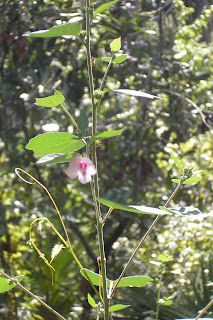 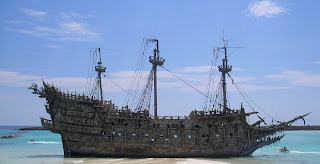 Aye, ye heard me, Talk Like a Pirate Day. Of course, Florida has seen it's share of pirates, and we still like a good pirate festival. The biggest of them all is Tampa's Gasparilla, held every winter for over 100 years.

Over New Year's weekend 1956, President Eisenhower spent 10 days in Key West recovering from his heart attack the previous September. Flying back to Washington, D.C. on the Columbine III, Eisenhower asked his pilot to make a detour to the south, to fly over Fort Jefferson in the Dry Tortugas.

If you were a president who had just been reminded of your own mortality, what would be going through your mind as you inspected the former prison of Dr. Samuel A. Mudd, accused of conspiring to assassinate President Lincoln?

I don't know what President Eisenhower pondered, but it didn't keep him from signing a bill nearly three years later, authorizing a marker memorializing Dr. Mudd's work during a 1869 yellow fever epidemic.

Fort Jefferson is now part of the Dry Tortugas National Park. It was originally a massive brick fort built in the 1840s. As the building sank under its own weight, and as new types of weapons made the fort's defenses obsolete, the Army halted construction. However, the fort's isolation was an asset for its role as a prison.

Florida Stories in the News

"Bill Would Designate the Cracker Horse as the Official State Horse" WPTV.com 9/14/07

I just received in my electronic in-box a nifty new thing -- a e-newsletter called "Heritage Happenings." It includes a lengthy list of local heritage events for the coming month, and from looking at this, no one has any excuse to be sitting at home bored. To sign up for your very own copy of "Heritage Happenings" visit Reclaiming Our Heritage's website, and click on "newsletter."
Posted by Lucy D. Jones at 9/14/2007 No comments:

Florida author Tim Dorsey spoke at the Upper Tampa Bay Library last night. His most recent book is Hurricane Punch, and he is working on the third draft of his next novel. The books are in that genre of Florida humorous crime novels populated by unusual characters, such as Serge Storms, serial killer and font of Florida lore. Serge often is described as the main character of Dorsey's books, but according to the author this is incorrect: "Florida is actually the main character."

Dorsey's stories are packed with Florida places, people, and stories. How do readers react to such specific settings, detailed right down to street addresses? Dorsey described two types of reactions he has encountered. People who live in Florida and are initimately acquainted with the place say that they feel comfortable in familiar surroundings. On the other hand, some people from out of state use the books as an "insider's travel guide." The places in Dorsey's books are real, places you can actually visit, places that might not make it into Fodor's guide.

For more information about Tim Dorsey, his books, and speaking calendar, visit his website, http://www.timdorsey.com/.
Posted by Lucy D. Jones at 9/12/2007 No comments:

Actress Jane Wyman died in California yesterday, after a long life and celebrated career. (Her obituary in the New York Times). Back in the 1940s, she was a rising Hollywood star, married (at the time) to another rising star, Ronald Reagan. She was getting better and better roles when in 1946 she played Ma Baxter in MGM's adaptation of The Yearling, Marjorie Kinnan Rawlings' novel of Cracker life on the Florida frontier. Ma Baxter had it hard, scratching out a living isolated in the piney woods, and burying all of her children but one.

Wyman was not the first actress chosen for the role -- that had been Anne Baxter, when the studio first tried to film The Yearling in 1941. The logistical challenges of filming on location in the Ocala National Forest with a cranky Spencer Tracy (as Penny Baxter) led to a long delay in the production. When it resumed, Gregory Peck was cast opposite Wyman. The make-up crew had some work to do making the young Wyman look like a worn-down pioneer woman, but that was only part of the effort. The rest had to come from Wyman herself, and she received an Academy Award nomination for her work.

Some more books about Florida or related in some fashion to Florida:

Walt Disney Imagineering: A Behind the Dreams Look at Making the Magic Real, by The Imagineers. Does knowing how something was created take away from the experience, or increase the appreciation for what was accomplished?

American Green: The Obsessive Quest for the Perfect Lawn, by Ted Steinberg. Read a review of the book from the Christian Science Monitor.
Posted by Lucy D. Jones at 9/09/2007 No comments:

Wow, Florida Cracker Houses sure have come a long way ...

Cracker: The Cracker Culture in Florida, by Dana Ste. Claire
Posted by Lucy D. Jones at 9/07/2007 No comments:

No White Shoes After Labor Day, or, Is Florida a Southern State?

Today is Labor Day, an occassion first observed 125 years ago to honor America's workers. In the intervening years, Labor Day came to symbolize the end of summer. Somewhere along the way, Southern women adopted a tradition that white shoes should be worn only only after Easter and before Labor Day.

So where does this leave women in Florida? Is this a Southern state, or not? A common generalization is that the further south you go in Florida, the further north you are. One professor I know sometimes muses that the line between the two is marked by whether you are served grits or a croissant for breakfast. I'm wondering -- could the line be drawn by whether or not women wear white shoes after Labor Day?

I don't want to get into North v. South debates -- we're all part of Florida's culture and heritage. But I am curious -- will women in Tallahassee be wearing white shoes this week? How about women in Miami?
Posted by Lucy D. Jones at 9/03/2007 7 comments:

Just because an old house has withstood a storm or two in its day, don't assume that it will survive another. The State of Florida has a program called My Safe Florida Home, designed to help homeowners make their houses better able to withstand natural disasters such as hurricanes. The Florida Division of Historic Resources has made available online its Guidelines for Retrofit Improvements to Historic Properties Assisted by the My Safe Florida Home Matching Grant Program. The purpose is to minimize negative impacts to the character of historic houses being retrofitted. The Guidelines include specific recommendations for roofing, walls, porches, doors, and windows.

The Division of Historical Resources also offers General Guidelines for Historic Properties in Recovery after a natural disaster, and Disaster Planning for Historic Resources.
Posted by Lucy D. Jones at 9/02/2007 No comments:

My sister just gave me a copy of Karen Russell's book St. Lucy's Home for Girls Raised by Wolves (Alfred A. Knopf, 2006). This collection of ten short stories by a young author from Miami has received glowing reviews, and I'm looking forward to reading the book over the Labor Day weekend. A quick glance at online reviews suggests I can expect some fantasy elements in a south Florida, Everglades setting.