Plant City Has Some Big Strawberries 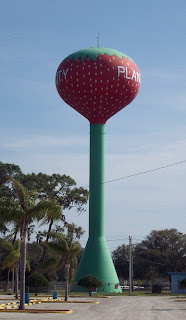 Two sources of information for preservation of historic ceramic and tile floors: 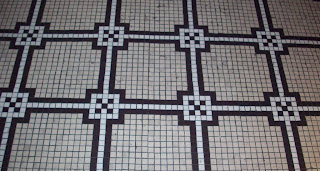 "One Man's Art Is Another's Trailer Trash" (Tampa Tribune, January 9, 2008: "Evoking the spirit of kitschy Americana like giant balls of string or alligator wrestling, seven aluminum-plated travel trailers once destined for the junkyard have gotten unexpected mileage as a roadside curiosity along eastbound Interstate 4."

"'Colored Beach' gets recognition" (Miami Herald, January 19, 2008: "As James D. Bradley Jr. scans the milelong strip of sand once known as 'Colored Beach,' he recalls boarding a ferry at Port Everglades 50 years ago, or riding across the sand in his father's jeep, to join hundreds at the only place in Broward where they could swim in the ocean.")

"Makinson Island in Osceola County emerging as eco-tourism site" (Orlando Sentinel, January 19, 2008: "Although it's owned by the public, few have seen Makinson up close in recent years because it's accessible only by boat. In times past, however, it has been home to citrus and cattle farms, a sanitarium for alcoholics and an exotic-animal attraction.")

"War re-enactors to put on show at Okeechobee battlefield" (TCPalm.com, January 26, 2008: "The public will get its first glimpse next week of what is to become of Okeechobee Battlefield State Park.")

"Project aims to unlock Pleasant City's history" (Palm Beach Post, January 26, 2008: " 'Wait. Go back,' Carlton Cartwright said as a grainy black and white photo of three smiling members of the city's 1940 Negro League baseball team flashed on the screen. 'One of those guys is my cousin.'")

"Uncertain future awaits Sanibel lighthouse" (Fort Myers Florida Weekly, January 10, 2008: "The U.S. Coast Guard oversees the tower and Bailey, who is chairman of the Sanibel Historic Committee, said he hopes they won't decide to let that light slowly extinguish, as more up-to-date technologies take the place of this old fashioned beacon for seamen.")
Posted by Lucy D. Jones at 1/27/2008 No comments:

I'm messing around with Blogger's template options, so things may be a little more jumbled than usual for a little while. Please be patient, or better yet, give me some suggestions for how to improve this blog's appearance!
Posted by Lucy D. Jones at 1/24/2008 No comments: 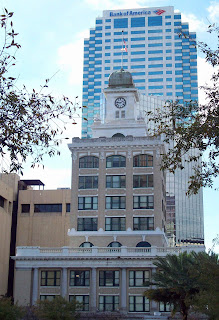 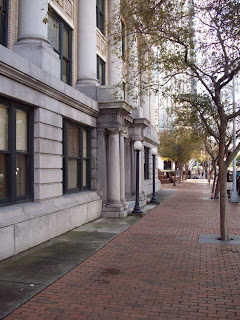 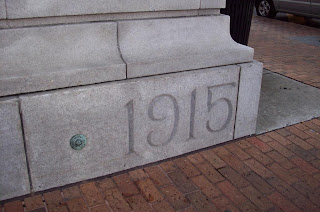 This weekend, we went on a field trip with Tampa Audubon to the Viera Wetlands and Merritt Island National Wildlife Refuge in Brevard County, on Florida's East Coast, near Cape Canaveral. The Viera Wetlands are part of Brevard County's water treatment and reclaimation system, located near the New Town of Viera and the A.Duda Sod Farm. The Duda family started planning Viera in the 1980s, and A. Duda and Sons has been operating sod farms since the 1970s. In addition to LOTS of birds, we saw a river otter, wild hogs, and a turtle at Viera Wetlands.
Sandhill cranes near the town of Viera 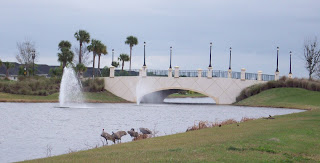 There was a caracara at the Viera Wetlands. 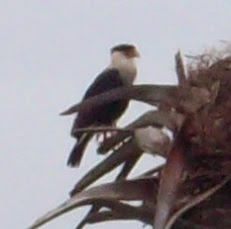 Along with an uncountable number of coots, only a tiny, tiny percentage of which are shown in this picture. 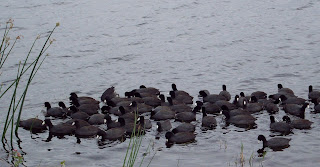 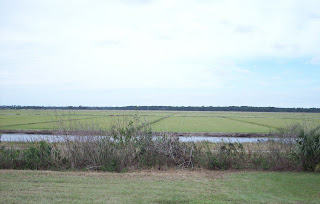 On the way to Merritt Island NWR, we stopped at Parrish Park, which is just on the other side of the Max Brewer Bridge from Titusville. The Max Brewer drawbridge is the longest swing bridge in the state, and one of only two existing historic deck girder swing bridges in Florida. The bridge is scheduled to be replaced by a high, fixed-span bridge. 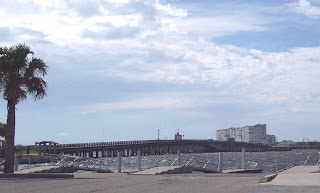 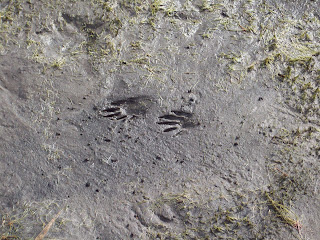 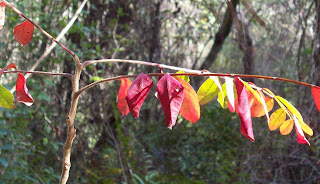 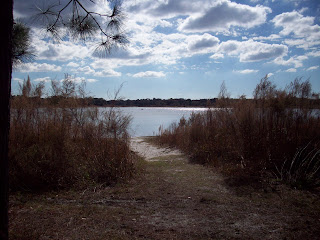 A week or so ago I had a chance for an afternoon walk and picnic at Lake Rogers Park in northwest Hillsborough County. It's a county-maintained park that opened in 2000 with lakes and nature trails, picnic tables and campsites. It's also a stop on the Great Florida Birding Trail; however, all I saw was osprey, seagulls, and a cardinal (but I was there in the afternoon, not the best time for bird watching).
The park is on Lake Rogers and Lake Raleigh. Raleigh Allen, a cowboy for the Lykes Company, bought some land out here in the 1880s. In the 1960s and 70s Mabel Lewis and James Sterling "Boots" Walker ran a hotel for African Americans. There was space for all types of outdoor recreation such as swimming, picnics, barbeques, and family gatherings.

There Was Nothing Civil About That War...

One hundred forty seven years ago today, "delegates to the Florida Convention in Tallahassee voted to secede from the United States of America." (Florida Secedes!, from the Library of Congress)
Posted by Lucy D. Jones at 1/10/2008 No comments:

"'Fountain Of Youth' Memories Bubble In Bay" (Tampa Tribune, January 5, 2008: "Not far from where the Tampa Bay Rays hope to build a new ballpark, something is bubbling to the surface.")

Well, maybe it was only a two cat night, not a three dog night, but temperatures in Florida dropped well into the freezing zone yesterday and this morning. Here in Tampa, we saw numbers in the 20s, and word is still out on how the strawberry crop fared.

It's not the coldest it's ever been here, and for youse guys up North, it's practically beach weather. But for Floridans, sub-freezing temperatures threaten livelihoods. Which is in part why Governor Crist declared a state of emergency, allowing farmers to get their crops out of the fields and to market more quickly. But, speaking optimistically, this 2008 cold snap is not a repeat of the winter of 1894-1895, when severe freezes changed the trajectory of Florida's history.

On December 29, 1894, extremely cold temperates reached far southward in Florida, as far as Palm Beach. In Tampa, the mercury dropped to 18 degrees fahrenheit. Fruit dropped from trees, blanketing the ground, and farmers lost the year's crop. This was bad enough, but on February 7, 1895, the temperatures dropped again. The trees and plants that survived the first frost had just begun to recover, sending out new, tender shoots. Whereas the first freeze destroyed one year's harvest, the second freeze killed the trees to the ground. Since it takes 5 to 10 years for citrus trees to first bear fruit, the loss was more than many farmers could overcome. When you read the histories of Florida's towns and counties, it's a common theme that after the freezes of 1894 and 1895, people left in droves, either to return North or to go further south in Florida. It took ten or more years in some cases for communities to recover from this loss. The state's citrus industry was devastated as well, with less than 150,000 boxes of fruit shipped out of state in 1895, a 97% drop from the 5,000,000 boxes shipped in 1893.

The romantic version of the story goes something like this. Railroad magnate Henry Flagler was huddled in frigid north Florida, when he received a box from Julia Tuttle in Miami. In the box were fresh orange blossoms, proof that Miami had escaped the cold hand of nature. Inspired by the white petals, untouched by frost, Flagler then built his railroad farther south, from Palm Beach to Miami. The reality is that Flagler already knew Tuttle and and others in Miami, and was already considering extending the railroad down there, but didn't want it to detract from his hotel in Palm Beach. The freeze was the impetus for Flagler's decision to go ahead and put Miami on his map.

The weather this week hasn't been like it was 110 years ago, and farmers and grove managers have new fruit and vegetable varieties and new techniques to help weather cold temperatures. But it's prudent to remember that in Florida, a day or two of freezing temperatures can have long lasting and long reaching ramifications.
Posted by Lucy D. Jones at 1/03/2008 2 comments: