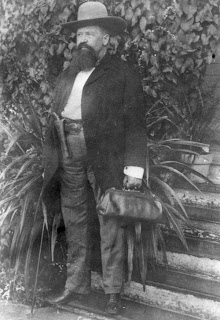 
Dr. Hiram J. Hampton owned and operated the Tampa Heights Sanitarium in the late nineteenth and early twentieth centuries, advertising his services "for the cure of CANCER, RUPTURE, SCROFULA and Kindred DISEASES, and all cases requiring SURGICAL ATTENTION. No Mercury Used In This Institution. Tape Worm Positively Removed." His wife Emma at times assisted as his nurse. The 1903 Transactions of the National Eclectic Medical Association of the United States recognize Dr. Hampton as member of the Eclectic Medical Examiming Board for Florida.

In Tampa today, Dr. Hampton is most widely known for the unique character of his and Emma's grave sites in Woodlawn Cemetery. The crypts are topped with at least life size seated statues of the couple, and local lore oft repeats the story that the Hamptons' backs are turned deliberately to the city. 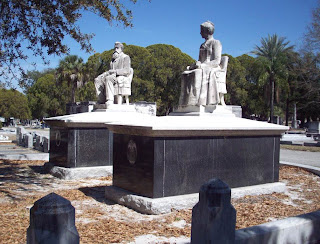 Tucked away on a side street off Ybor's Seventh Avenue is a white building with distinctive, large windows. 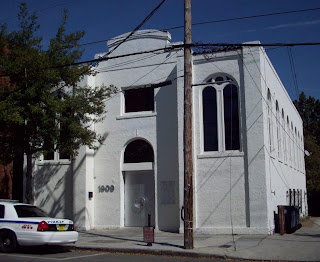 It's obviously old,
and looks like it might have been a church,
but now it's a nightclub.

Here are links to photographs of the building when it was the Clark Memorial Baptist Church and Baptist Goodwill Center -- back when it was much taller!

Burgert Brothers photograph showing the side of the church as well (click on thumbnail image for larger view)
Posted by Lucy D. Jones at 2/26/2009 2 comments: 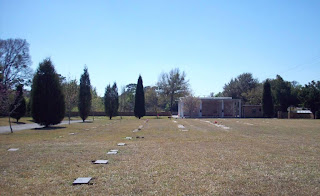 Despite living lives of flair and flourish, the Showmen's Rest is rather calm and traditional. Founded in 1952 by the Ladies' Auxiliary of the Greater Tampa Showmen's Association, the cemetery was built in a modern style for that time. It is a memorial park bordered by a sandstone wall, with individual grave marked by small rectangular slabs. A garden mausoleum stands in the southern portion of the cemetery (for more about cemetery styles, read David Charles Sloan's The Last Great Necessity). The cemetery is indeed a peaceful place for showmen to rest.
Posted by Lucy D. Jones at 2/25/2009 4 comments: 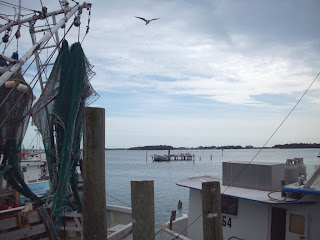 This weekend was the annual Cortez Commercial Fishing Festival, in the fishing community of Cortez, of course. Lots of people, lots of seafood, some music, some art, and a nice time. We had peel-and-eat shrimp down on the fish house docks, while watching the pelicans, seagulls, and egrets stir up a ruckus. MoJo (Morris Johnson)'s paintings made me smile. He's a clam farmer and a folk artist, and with that combination, I suspect a sense of humor comes in handy.

Here is the 1912 Cortez Rural Graded Schoolhouse, once used as a school, then as an art school, and as the home and studio of weaver Robert Sailors. In 1999, Manatee County purchased the school, and recently renovations were completed. It is now the home of the Florida Maritime Museum. 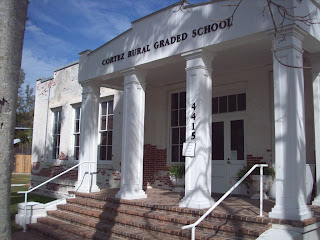 Here's a boat used by Cuban refugees to cross the Straits of Florida. It's been fixed up by the craftsmen at the museum's boat works- you can see a "before" picture on their website. 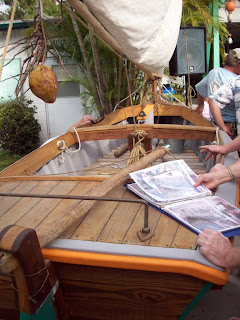 The festival is a great time to visit Cortez, but then, any day is. Stop by sometime and visit the museum, learn how to make a wooden boat, have lunch at the docks, and take some fresh seafood home for dinner.
Posted by Lucy D. Jones at 2/23/2009 1 comment:

In Letters from the Frontier, Major General George A. McCall wrote of his experience as a young officer working to open a military road from Tampa Bay to what is today Ocala in Marion County. This was the Fort King Road, traces of which can still be seen through central Florida's palmetto and pine forests. 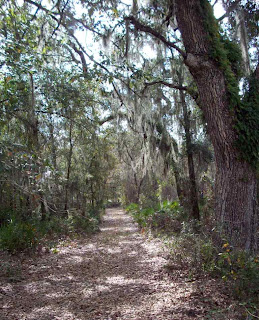 In a 1828 letter to his brother, McCall recounted a story about building a bridge over the Hillsborough River

"...I was with my men one morning before breakfast; two of the three trestles upon which the bridge was to rest being set erect and pinned together temporaily, simply by boards tacked on to them and to a log upon the bank to keep them in position until the third trestle was raised, which the men with ropes were at that moment bringing to its upright position; I observered our most worthy and esteemed Surgeon seated on the trestle nearest to me. I had just thought of walking up the steep board leading from the river-bank to the trestle where the Surgeon sat, in order to have a little pleasnat chat with him before breakfast, when the third trestle, which the men were in the act of raising, and which our chief carpenter Plew, stanking on the middle trestle, was preparing to fasten to the one on which he stood -- lo and behold! trestle No. 3 swings beyond its perpendicular, through the over-strain upon the rope in the hands of the men on the opposite bank, who were raising it. It throws the men who hold the guy, by a sudden jerk, into the river, and striking with its great weight the middle trestle, drives that against No. 1 with sufficient force to send it with double velocity against the bank. The Doctor, who, as I have said, sat upon the last trestle, described the arc of the circle, still seated and with perfect composure, until the trestle rudely strikes upon the bank, when he is precipitated backwards into the water six or eight feet deep. As he rises again to the surface, I, with one of the men, spring to the spor, and we draw him out unharmed, though thoroughly chilled and minus his gold spectacles. Plew, who was on the highest trestle, at least twelve feet from the water, boldly jumped clear of the debris and swam to shore. The odd fellow, a private of company C, was lifted up the bank by some of the men, when the first words he uttered, as he shook himself like a great Newfoundland dog, were: "Chalk and all gone!" it having so happened that his chalk and line, which were lying on the trestle, were swept down the current, and could not be replaced short of Fort Brooke. The Doctor's spectacles were afterwards found by an Indian at the river-ford below, to which point they had been carried by the swiftness of the current and there stranded. I should add, that my excellent friend, the Surgeon, experienced no serious inconvenience from the accident; and, except that occassioned by the loss of his glasses, looked upon the thing as a fair subject for a good hearty laugh."

Since the bridge facilitated troop movement along the Fort King Road, it had strategic value during the Second Seminole War. It was rebuilt, but continued to be threatened by the Seminoles. On Christmas morning 1835, Major Dade was delayed on his journey from Fort Brooke to Fort King when his troops discovered that the bridge had been burned. The men managed to cross the river, only to meet their deaths near Bushnell on December 28. The Army built a wooden fort at the bridge, Fort Foster, to protect the river crossing. 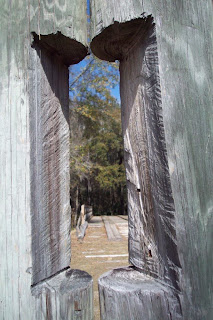 Today Fort Foster and the wooden bridge are part of the Hillsborough River State Park; both have been recreated and are open to the public. Timbers from the 1835 bridge over the river are on display at the park. On February 14 and 15, 2009, re-enactors will stage a battle between the U.S. soldiers and the Seminoles at the bridge -- for more information, please visit the Fort Foster website.
Posted by Lucy D. Jones at 2/12/2009 1 comment:

On display in the Rocket Garden at the Kennedy Space Center Visitor Center is the service arm used by Neil Armstrong, Buzz Aldrin, and Michael Collins to get aboard the Apollo 11 command module on July 16, 1969. Just days later, Armstrong and Aldrin were walking on the Moon. 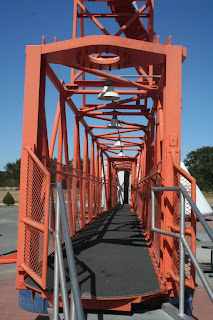 This service arm stood more than 30 stories above the ground when it was attached to the massive Saturn 5 rocket. The black no-slip walking surface was not there in 1969, and if the astronauts looked down when they crossed, they could have seen through the metal grate to the ground. The gantry led to the White Room where crew men checked the astronauts' suits and helped them into the module. After making sure everything was hooked up correctly, the crew men shut the door and descended the launch tower, leaving the three astronauts to their historic journey. 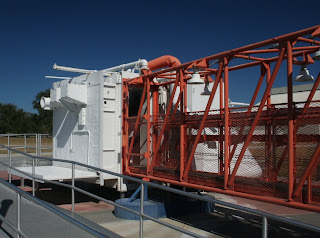 Check out the antennas on this old Soviet space craft on display at the Kennedy Space Center visitor center: 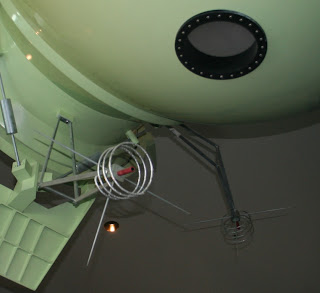 On a recent trip to Hillsborough River State Park, I spied two stone markers. From across the parking lot, they looked like tombstones, so morbid curiosity led me to take a closer look. Turns out they are commemorative markers for the Penny Pines and Millenium Forest projects at the park. 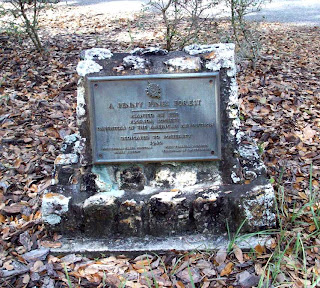 "A Penny Pines Forest
Planted by the
Florida Society,
Daughters of the American Revolution
Dedicated to Posterity
1940"

The Penny Pines program was a national program to raise money to plant trees in national forests. The program was the brainchild of Margaret March-Mount, who is also credited for getting the support of the Daughters of the American Revolution. 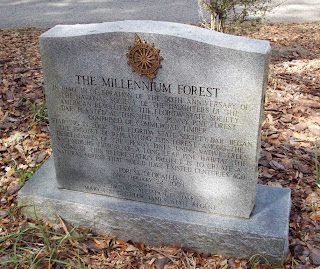 "In 1940, in celebration of the 50th anniversary of the National Society of the Daughters of the American Revolution the Florida State Society DAR planted at this site a 'Penny Pine Forest,' comprised of commercial timber.

"Starting in 2002, the Florida State Society DAR began the project of replanting this forest among the descendants of the 'Penny Pines' using native trees and shrubs typical of a long leaf pine habitat. the goal of this reforestation project is to create a natural forest that would have existed centuries ago.

Nike Hercules Missile Base HM-69 in Everglades National Park is now open for tours. This missile base was built in the isolation of the Everglades, yet only 160 miles from Cuba and less than one year after the Cuban Missile Crisis. Now the missile base serves as a reminder of the roles played by Florida and Cuba in that chapter of the world's history.

The Everglades National Park has tours available each Saturday from now until March 28. For more information, please read the park's news release.

I first learned about these tours through the National Park Service's Heritage News, a newsletter available on the web or through an e-mail subscription.