What could be more fun than a hole in the ground?! 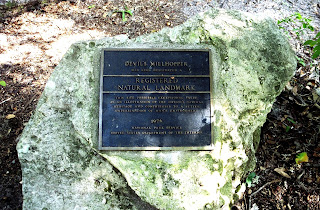 This summer, the family visited Devil's Millhopper State Park near Gainesville. I hadn't been there for a decade or more, since I was in grad school at the University of Florida. Devil's Millhopper is a park that features a 120-foot-deep, 500-foot-wide sinkhole. A 236-step wooden staircase winds down to the bottom. (Walking down 236 steps while outside is an odd thing for us flatlanders. Walking up 236 steps is popular with local residents who incorporate the sinkhole into personal fitness routines.) It's a beautiful and peaceful place, with shade trees and trickling spring-fed springs.
Here's how the State Park service explains the name:
"Devil’s Millhopper gets its unique name from its funnel-like shape. During the 1880’s, farmers used to grind grain in gristmills. On the top of the mill was a funnel-shaped container called a 'hopper' that held the grain as it was fed into the grinder. Because fossilized bones and teeth from early life forms have been found at the bottom of the sink, legend has it that the millhopper was used to feed bodies to the devil. Hence, Devil’s Millhopper."
At the park, there is a nature trail, and a small interpretive ceter where you can see artifacts left behind by Native Americans, the Spanish, American explorers, and other who have visited the site over the past 10,000 years.
-----------
Information about Florida sinkholes:
Florida Department of Environmental Protection
University of Florida IFAS
Posted by Lucy D. Jones at 10/10/2007