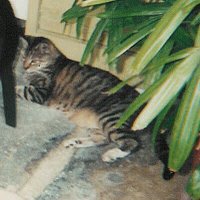 A new book I read recently is Hemingway's Cats by Carlene Fredericka Brennen (Pineapple Press, 2006). Ernest Hemingway loved cats. And women. Brennen's book delves into his relationships with both.

A trip to Key West would be incomplete without a visit to the Hemingway House and Museum on Whitehead Street, to pay your respects to its six-toed feline inhabitants. According to Brennen, these cats are not descended from Hemingway's pet cats, but are more likely the descendents of Hemingway's neighbor's pet cats. Hemingway did, however, have many pet cats at his home in Havana, where he went so far as to build a tower -- a four-story building -- in his garden, just for the cats.
Posted by Lucy D. Jones at 11/07/2006