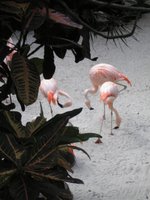 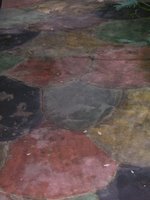 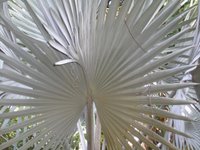 After The Florida Show yesterday we headed over to Sunken Gardens. The day started out gloomy, but as we reached downtown St. Petersburg, the sky cleared. Just what you would expect from the Sunshine City. (The nickname was coined in the 1910s by the editor of the St. Petersburg Evening Independent, who promised to give papers away free any day the sun didn't shine. The paper was in business for 75 years or so, so you can tell that didn't happen too often.)

Sunken Gardens was one of many small roadside attractions that capitalized on the steady stream of middle-class tourists who drove to Florida in the early twentieth century. All that was needed was something to catch the eye, to tempt drivers to pull over for a quick stop. Some roadside attractions incorporated some part of the natural environment, since Florida's image was that of an exotic, tropical Garden of Eden. When plants alone were not enough of a draw, the attractions added birds or reptiles (good and evil) or water features (the Fountain of Youth). Whether or not it was intentionally done, the roadside attractions both took from and added to Florida's mythic identity.

But who's to say if all that crossed the mind of George Turner, Sr., a horticulturally inclined plumber who drained a small lake in his backyard and planted a few things? Eventually, enough people came to look, that he started charging admission. With more plants, a few reptiles, some parrots and flamingos, Turner's Sunken Gardens was on its way.

Next door to the Gardens was a large Mediterranean Revival building that housed the Sanitary Public Market. In the 1940s this became a Coca Cola bottling plant, and in the 1960s the Turner family bought it and turned it into "The World's Largest Gift Shop." I am still sorry that I never got to visit the gift shop, which closed in 1995, a few years before I moved to Tampa.

In 1998, the Turners put the Gardens up for sale. After rumors that a nudist colony would buy it, the property was purchased by the City of St. Petersburg. The city removed most of the animals and renovated the former public market building, which now holds a much smaller gift shop, offices, meeting rooms, a Carrabba's restaurant, a Coldstone Creamery ice cream shop, and Great Explorations (a children's science museum).

My favorite part of Sunken Gardens? The sidewalks (see the middle photograph above). They are concrete, with lines that look like they were drawn with a stick while the cement was still wet. Each section is painted a different color.
Posted by Lucy D. Jones at 11/13/2006