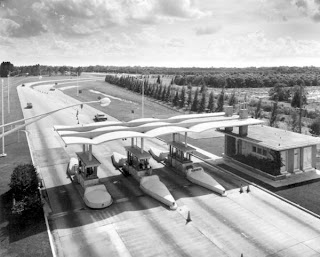 This year marks the 50th anniversary of the first segment of Florida's Turnpike, a 110-mile stretch connecting Miami and Fort Pierce. The Ft. Pierce to Wildwood section followed in 1964, and the Miami to Homestead Extension in 1974.

In 1953, Governor Dan McCarty authorized the Florida State Turnpike Authority to build the highway, which was originally called the Sunshine State Parkway. (Traffic Jam in South Florida has a link to a Sun-Sentinel article, "How Florida's Turnpike Transformed the State.")

Some of you may not remember Governor Dan McCarty, whose promising career came to an untimely end. A Progressive Florida Democrat in the 1940s and 1950s, he was a Fort Pierce citrus grower, cattleman, and war hero who ran for governor in 1948. He lost that race to Fuller Warren, a Democrat from rural North Florida. Four years later, McCarty ran again and won, campaigning on a platform of ending political patronage. This election can be seen as part of a larger and growing shift in political power in 1950s Florida, from rural to urban, and north to south.

McCarty was just 40 years old, the father of three children, when he took office in January 1953. In February, he had a debilitating heart attack, and he was unable to recover. In September 1953 he died after less than a year in office. The President of the Senate, Charley Eugene Johns became acting governor, and in 1954 McCarty's friend and political ally LeRoy Collins was elected to complete the rest of his truncated term.

Building a Community: The History of the Orlando-Orange County Expressway Authority, by Jerrell Shofner

Floridian of His Century: The Courage of Governor LeRoy Collins, by Martin Dyckman

(Photo Credit: Toll Plaza at the Ft. Pierce entrance to the Sunshine State Parkway, 1959. From the Florida Photographic Collection, State Archives of Florida.)
Posted by Lucy D. Jones at 4/05/2007