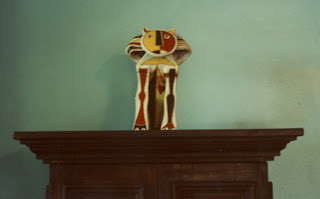 Back in 1991, I visited Key West for the first time, and one highlight of the trip was the Hemingway House. The tour guide casually pointed out a ceramic statue sitting on top of a cabinet, a gift from from Pablo Picasso to Ernest Hemingway. Years later I heard that the statue had been stolen, which honestly wasn't surprising considering it was a cool Picasso statue just sitting on a cabinet in a house.

Years later, while going through boxes of old photos (oh, the pre-digital days), we came across this picture from that 1991 trip. According to the Hemingway House museum's website, the cat was found in a box in the 1970s, and Hemingway's wife said that it was a gift from Picasso to Hemingway. The two men had become friends when living in Paris in the 1920s. The statue was stolen during or shortly after a house tour in November 2000, and recovered a month later when the thief tried to use it as a deposit for a small boat. Unfortunately, the statue was badly damaged. The statue now on display in the house museum is a replica.