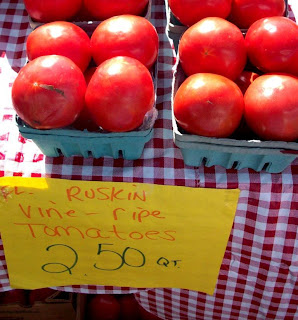 Primed by promises of fresh, local produce, I visited a local fresh market this week for the first time in a long while. I surmised that since a lot of vegetables are grown in Florida, that a fresh market in Florida would have little room for foreign fruit. So I was disappointed to see Chilean grapes and California avocados.

I acknowledge my hypocrisy in expecting local produce in Florida, a state whose vast agricultural economy is based on selling to people who live elsewhere. For centuries, Florida farmers have made their livings by selling oranges and green beans and strawberries to people far, far away. Pioneering farmers loaded citrus onto steamboats and trains so that hotels in New York City might serve sectioned fruit to their guests. Thousands of men were lured to Florida by the promise of a better life as a gentleman farmer, with ten acres in the country and a house in town.

Indeed, there were several local products available at the Oldsmar Fresh Market that I do not see at my local Publix or Wal-Mart Supercenter. There were fresh breads from a local bakery, fresh Gulf seafood, and honey from local bees. Of course there were Florida strawberries, and Ruskin tomatoes. There was a table of Florida citrus, and not the shiny perfect fruit that gets mailed away in gift baskets, but the duller, lumpier fruit Floridians keep for themselves because it tastes so good. Here were the Florida grapefruit, the Temple orange, and the Honey Murcott. The Temple and the Honey Murcott oranges are both tangors, crosses between tangerines and sweet oranges. The Temple orange gave its name to the city of Temple Terrace, where larges groves of the fruit once grew. The Honey Murcott orange is named after Charles Murcott Smith who first planted groves of this variety nearby in Pinellas County. 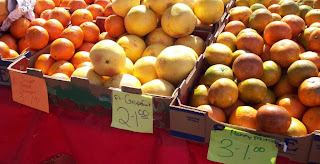