These new highways brought automotive tourists and their money to the communities along the roadways. During World War I, advocates of the Old Spanish Trail (and other national highways) promoted its importance as a military road, vital for national security and defense, anticipating Eisenhower's Interstate Highway system by several decades. In the 1920s, Harral B. Ayres, the Old Spainish Trail Association's director, encouraged the notion that the highway followed old Spanish roads, using the romance of the past to promote tourism.

The terrain the highway was to cover in the southeastern United States hampered construction - bridges were needed over the many rivers and swamps of the coastal South. The Old Spanish Trail was not completed until 1929, an event marked by a three-day celebration in St. Augustine, and the dedication of this commemorative marker (which since has been moved twice). 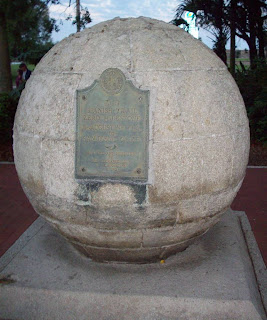 Each year, on the last weekend of April and the first weekend of May, Crestview, Florida, holds the Old Spanish Trail Festival. This year will be the event's 53rd anniversary, and is only 11 days from now!