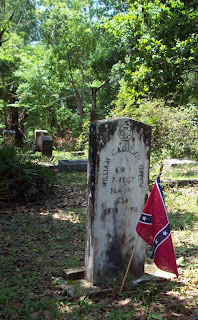 This headstone is the type authorized by the federal government in 1930 to be placed on graves of Confederate soldiers, with a pointed top and the Confederate Cross of Honor inscribed above the soldier's name, rank, company, and regiment.

William Green's Confederate pension application (on file at the Florida State Archives) reveals some tidbits about his and his family members' lives. He was born April 7, 1839, in Nassau County, Florida. At the age of 23, on May 16, 1862, he listed in the Confederate Army, serving in Company K, 2nd Regiment, of the Florida Cavalry. Three years and one day later, he was discharged in Baldwin, Duval County, because the war was over. He and his wife Mary raised ten children in Bradford County, Florida. When he grew older, he applied for a pension from the State of Florida, claiming that his service had given him "piles" (hemarrhoids) and rheumatism.

After William's death on December 1, 1918, Mary applied for a Confederate widow's pension; however, she encountered difficulties in proving that she was actually married to William. The Bradford County Courthouse had burned in 1865, destroying the county's records. In her application is a letter from Mary Green, dated February 22, 1919, to the Hon. Ernest Amos, who served as State Comptroller from 1917 until 1933. Included with her letter were five affidavits from people who knew William and Mary Green to be married, along with two pages from the Green family bible recording William's birth and marriage. (Mary Green requested that the bible pages be returned to her, but as the scanned images are online with the rest of the pension application paperwork, this apparently did not happen.)

The Florida State Archives has scanned approximately 14,000 Confederate pension applications, and made them available online (http://www.floridamemory.com/Collections/PensionFiles/index.cfm). While some files have little information, others - such as that of William G. Green - reveal personal histories that might otherwise be unrecorded.
Posted by Lucy D. Jones at 6/17/2009