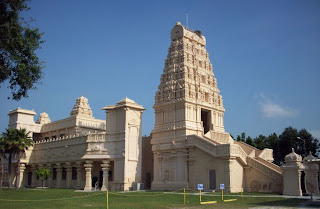 In the future, will the Hindu Temple of Tampa be a historic landmark?

I say that even though religious properties have to meet additional considerations, considerations designed to avoid the appearance of an endorsement of religion by the federal government. To be considered eligible for the NRHP, a religious property may have outstanding architectural merit, or have cultural significance. The Hindu Temple of Tampa represents the growth of the Hindu community in Florida, following the track that other immigrant groups have experienced in the United States. As permanent populations of Hindu Indians grow in the Florida, and the U.S., the temple is a means by which children may be taught Hindu cultural and religious beliefs and traditions (A Place at the Multicultural Table: The Development of an American Hinduism, by Prema A. Kurien, Rutgers University Press, 2007).

Architecturally, it is unique in Tampa. The earth-toned gopuram (the monumental tower at the temple's entrance) breaks above the tree line; the temple walls are covered with carvings and statuary. A team of ten men from India spent years working on these decorations.

The story of the temple's construction is told in an article from the October 24, 2003, St. Petersburg Times, "The Deities of Lynn Road." Difficulties included finding an appropriate site, and getting zoning permission for a building height of 70 feet.
Posted by Lucy D. Jones at 7/02/2009