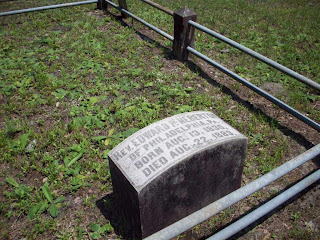 Edward Heberton is buried in the Laurel Grove Cemetery in Waldo, Florida. His marker is a rather plain marble stone: "Rev. Edward P. Heberton of Philadelphia, Pa. Born Aug 13, 1830, Died Aug. 22, 1883." Why was it so important to mention that he was from Philadelphia, and how did he end up so far away from home?

From the Necrological Reports and Annual Proceedings of the Alumni Association of Princeton Theological Seminary (Google Books is really a handy research tool), we learn that Edward Payson Heberton was the son of a minister. he attended college in New Jersey, studying the law, before a 12-year career with the U.S. Coastal Survey and U.S. Navy. Heberton was ordained as a minister after the Civil War, in 1868, serving at churches in Philadelphia, Pennsylvania; Duluth, Minnesota; Columbus, Ohio; and Deerfield, New Jersey. In 1882 he came to Florida as a missionary, became ill, and died in Waldo on August 20, 1883. He was 54 years old, and left behind a wife (Carrie) and five children.

What this biographical sketch doesn't tell us is what he thought of Florida, what it was like for his wife to follow him to a rural frontier. Who chose the tombstone, and why was it so important to mention that he was from Philadelphia?
Posted by Lucy D. Jones at 7/01/2009