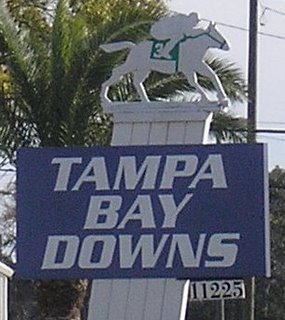 Under the clear blue skies that make Florida so popular with winter residents, Tampa Bay Downs kicked off its 2006-2007 season of thoroughbred horse racing today. The feature race was the 22nd running of the Inaugural Stakes, won by Dream of Angels.

Soldiers stationed at Fort Brooke during the 1820s ran the first horse races in Tampa. Nearly 70 years later Tampa’s first race track opened in Spanish Park, east of Ybor City. Then, in 1896, Henry Plant built a half-mile race track at the Tampa Bay Hotel. The idea was that the southern winter resort would offer amusements similar to those found at northern summer resorts. Within a few years, races at the Tampa Bay Hotel track were run in conjunction with the state fair.

In 1909 several local businessmen came together to build a new, longer (one-mile) track in West Tampa, hoping to attract more and better horses. Competion with Moncrief Park in Jacksonville was stiff, but both the Moncrief and West Tampa tracks struggled when anti-gambling campaigns intensified. In 1911, the Florida Legislature made bookmaking illegal. On March 30, 1911, the West Tampa track’s grandstand and sheds burned, and soon thereafter, Moncrief closed. Horse racing was still legal in Florida, and it still took place in Tampa at the fairgrounds, but on a much smaller scale.

Not until after World War I did Florida horse racing experience a resurgence. In the 1920s, tourism and development shifted from north Florida to south Florida, and the horses followed. Miami became the state’s racing capital. In 1926, Tampa’s fourth race track, Tampa Downs, opened briefly to challenge Hialeah. Racing was very sporadic in Tampa until 1947, when Tampa Downs was reorganized as Sunshine Park. In the 1960s, the track was known as Florida Downs, and in 1980 received its current name of Tampa Bay Downs.

(One of my current research topics is thoroughbred racing in Tampa before World War I. I’d love to hear from anyone with photographs, programs, or stories about the old tracks.)
Posted by Lucy D. Jones at 12/09/2006