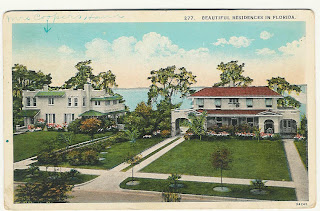 Here's another post card. On this one, someone wrote "Mrs. Cooper's House" in the upper corner with a little arrow pointing to a big white house with green awnings on a lake. The card is titled just "Beautiful Residences in Florida," with no other hints as to where this might be. However, there were quite a few Sebring postcards with this when I got it. So I went to my handy-dandy bookshelf, and pulled out Stephen Olausen's Sebring, City on the Circle (St. Augustine: Southern Heritage Press, 1993) and flipped through the index. Turns out more there's been more than one Mrs. Cooper in Sebring, but fortunately the book has lots of photos. And I was right, this was a postcard of Sebring.

Mrs. Mary B. Cooper of Virginia built this house at 507 Lakeview Drive in the early 1920s. However, according to Olausen, while this house is a nice example of Mediterranean Revival architecture, it is more significant as the home of Dr. Harold V. Weems. It seems that while working in a Georgia hospital, Dr. Weems contracted a bad case of blood poisoning. His friend Dr. Frank Manley, who had a drug store in Sebring, suggested Weems recouperate in sunny Florida. And he did. Dr. Weems ended up staying here, and opened the first hospital in Sebring. Later, he bought Mrs. Cooper's house.

Of course, we are left to wonder who bought this card and labeled the house, and who they sent it to. Were they friends of Mrs. Cooper's? Was this a bit of gossip? And who lived next door to Mrs. Cooper? (Evidently someone unimportant to the postcard annotator.)

Again, Olausen's book has the answer to at least one of those questions. The white house with the red roof belonged to H. Orvel Sebring. The house was built in 1919, and is now listed on the National Register of Historic Places. An Ohio native, Orvel (along with his father) founded the town of Sebring. The house was designed by M. Leo Elliot, who may be best known for his Tampa projects, which include City Hall, Centro Asturiano, and the Italian Club.

(Next month, Sebring will host the 55th Annual 12 Hours of Sebring, at the Sebring International Raceway.)
Posted by Lucy D. Jones at 2/19/2007