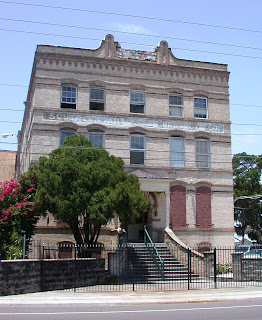 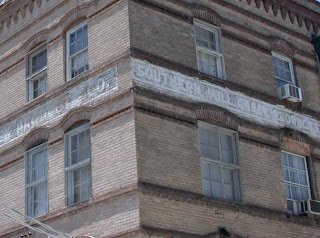 Yesterday's mystery photo was of the front steps of the A. Santaella factory on Armenia Avenue in West Tampa. The former cigar factory is being transformed into the West Tampa Center for the Arts.

Cigar factories are simple, yet elegant in their functionality and detail. The architectural design is quite deliberate -- large open rooms with space for workers, walls of windows for light and ventilation. Each factory had its own water tower -- some were separate, others were concealed in fancy towers. ("Anatomy of a Cigar Factory Building")

Marilyn Esperante Figueredo told the history of this factory in Cigar City Magazine: "The Best of the Best: The Story of the A. Santaella Cigar Factory."

It's a different factory, but this video tour of the J.C. Newman Cigar Factory is interesting, too.

The Gonzalez Habano Cigar Company's map of surviving cigar factories in Tampa, with photographs
Posted by Lucy D. Jones at 5/22/2007