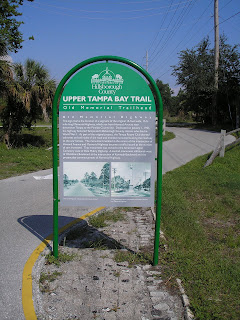 Historically, the highway ran from Tampa to the Pinellas County line. According to this sign: "Dedicated on January 1, 1921, the highway honored Tampa and Hillsborough County citizens who died in World War I. As part of the original projet, the Tampa Rotary Club planted oak trees on both sides of the road and erected monuments along the roadway to the war heroes." 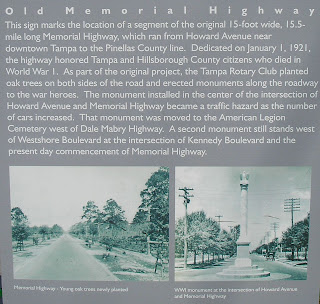 The bottom left photograph on the sign shows the young oak trees lining the highway. And here's how Old Memorial Highway looks today, facing west from the trail marker. 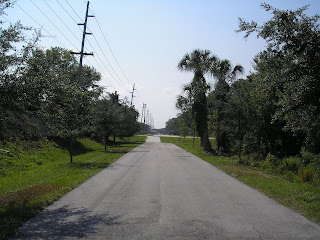 The photo on the bottom right of the trail sign shows the World War I monument that stood at the intersection of Memorial Highway and Howard Avenue, until it became a traffic hazard and was moved to the American Legion Cemetery. Another similar marker stands on a small island in a sea of traffic at the intersection of Kennedy Boulevard and the modern start point of Memorial Highway (this is on the west side of Westshore Mall in Tampa).
The old highway was paved with asphalt blocks, which created a durable but bumpy surface. Asphalt blocks were a fairly common paving material in the early twentieth century, when they were made in local factories and transported to the construction site. (In St. Petersburg, some streets in the Old Northeast neighborhood were asphalt block.) 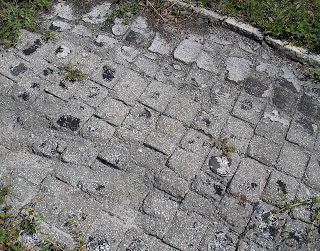 The Upper Tampa Bay Trail is maintained by the Hillsborough County Parks, Recreation, and Conservation Department. The Old Memorial Highway Trailhead offers shady parking and picnic tables, along with easy access to the trail. This trailhead is located on the southern end of Montague Street, south of Braulio Alonso High School.
Posted by Lucy D. Jones at 6/13/2007