Last night was the premiere of "SEMINOLE HEIGHTS: An Intimate Look at the Early Years," a documentary about one of Tampa's historic neighborhoods. Produced by Suzanne Prieur of the Old Seminole Heights Neighborhood Association and written and directed by Gene Howes of Cigar City Pictures, this 50-minute film played to a sold-out audience at the Tampa Theatre. Yep, sold out. A documentary. About a historic neighborhood. No, it is not a little theater. It's a very involved bunch of people who live in Seminole Heights.

It's a good documentary (and I'm not saying that just because I make a brief appearance). I thought they did a good job of balancing the places and personal stories, and bringing in connections between what was going on in the world at large and what was happening locally. The story moved along at a good speed, and the images were amusing. So, if you get a chance, buy a copy of the DVD -- proceeds will help pay for the next documentary to be produced, covering the years after 1945.

(photos: crowds and marquee at the Tampa Theatre for the premiere of the Seminole Heights documentary, April 17, 2008) 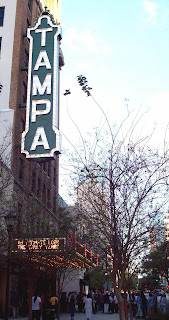