Thoughts in a Parking Garage

History is everywhere you go, if you just stop and look. This week I encountered history on the third level of a parking garage in downtown Tampa.
The William F. Poe Parking Garage is not itself particularly historic (yet), although it is named after a former Tampa mayor. It does, however, have a great view of the Hillsborough River and the University of Tampa campus, including the former Tampa Bay Hotel. 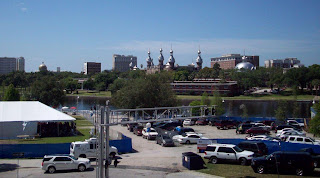 The white tent in the lower left corner of the photo was the groundbreaking for the new Tampa Museum of Art. I wasn't there for the ceremony, but Brass Bowl was if you want a ground-level perspective.
I was there to do some research at Tampa's downtown library. This is the main branch, where they keep the city directories, Sanborn maps, vertical files of newspaper clippings, local history books, and other goodies. The official name of this building is the John F. Germany Public Library. Who is John Germany and why is a library named after him? Germany grew up in Plant City, and became a prominent Tampa attorney. His influence was great in finding the money and political will to build a new central library in Tampa in the 1960s (The original early-twentieth-century Carneige library had been outgrown). In a podcast from WUSF (Florida Stories, August 2007), you can hear Germany talking with his son about his role in this effort. The library's website also provides information about Mr. Germany. 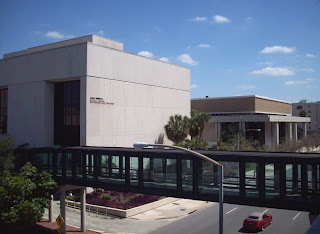 In this photograph I took from the parking garage you can see the walkway that connects the garage with the library and the Tampa Bay Performing Arts Center, you can see the newer addition on the west side of the library, and you can see the original 1965 main part of the library. There's a oval domed auditorium between the two buildings that is part of the original design. The library's website also has interesting photographs of the library's construction. The lots around the library site have really changed in the past 40 years.
So there you have it. Just looking over the wall at the parking garage I saw the river, the Tampa Bay Hotel, Tampa's second main library, a reminder of John Germany, and a glimpse of the future with the construction of a new art museum.
(As an extra tidbit, the Library of Congress website offers a podcast of a lecture by Shannon McDonald titled "The Parking Garage and Its Impact on Urban Planning.")
Posted by Lucy D. Jones at 4/22/2008