This weekend was the First Annual Renew Tampa event, highlighting connections between historic preservation and environmental conservation. Part of Renew Tampa was a two-day schedule of speakers and an expo hall of architects and builders, which was held at the historic Berriman-Morgan cigar factory in Tampa (click here for Tampa Tribune's special report on the Berriman Morgan factory, including an interesting interactive graphic of the building and its history). The factory is currently being renovated by Jammal Engineering. 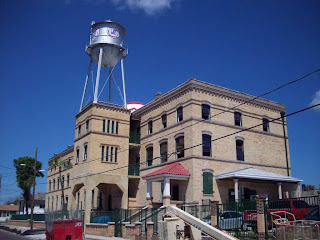 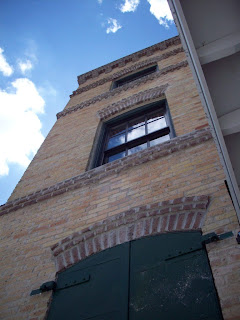 In past decades, after cigars were no longer made within its walls, the Berriman-Morgan factory stood empty. Interstate 275 cut the factory off from the rest of West Tampa, and today the interstate is being widened, bringing the highway right up to the factory lot. 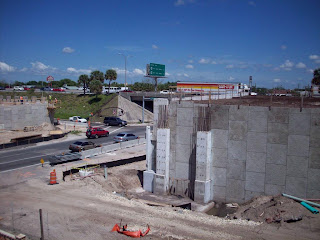 Cigar factories are not heavy industrial sites, and so neighborhoods grew up around them, with houses immediately across the street. It was Old Urbanism, with home, work, school, and stores all within walking distance. Or if not, you could hop on a streetcar to get there. Looking out the windows of the Berriman-Morgan factory, a few remnants of this pattern of development can be seen. 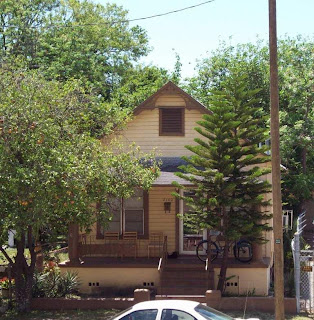 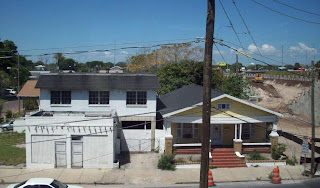 After the event, I drove home, cutting through West Tampa on Howard Avenue. As I passed by Baker & Co., I stopped and turned around and went back. It's an antique / nostalgic general store in a restored historic brick building. They have a tea room for group events, and you can buy rose-scented soap, nickel candy, or bleacher seats from Wrigley Field. 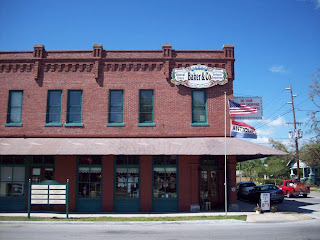 Behind the store is this funny little house, one of a string of similar funny little houses on the block. This is a common pattern in West Tampa, where the entire neighborhood wasn't built at one time by one developer like suburbs are today, but where a small developer or single landowner owned a few city lots and built a few houses using the same design. These then generated rental income, an investment. 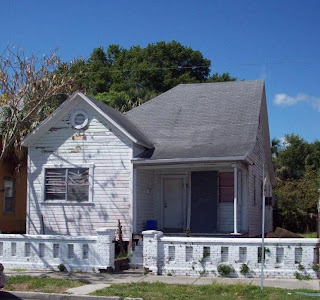 Going back to the store's parking lot, this is what you see: 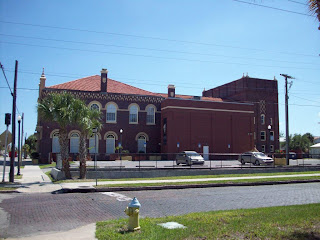 This is the Centro Espanol de West Tampa, built as a branch of the El Centro Espanol in Ybor City, a social club and mutual aid society for Spanish immigrants in Tampa. In recent years, the fate of the Centro Espanol de West Tampa building has been up in the air, but today it is the temporary home of the Tampa Museum of Art. The museum itself has been in the news a good bit, but the short end of it is that the collections are being housed here while a new museum building is being built downtown. 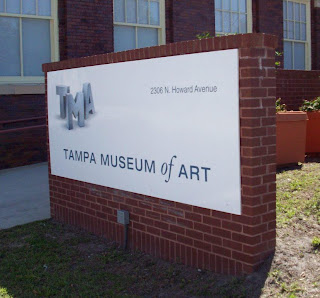 I stopped in, but I hadn't realized the museum closed at 4 on a Saturday. I apologized to the woman at the desk for coming in 10 minutes before closing. That's fine she said, it'll only take you five minutes to go through the gallery anyhow. Oh-kay....
So I went ahead to the gallery, which is around a post and through what looks like a tiled cafeteria. There's lots of white. And the exhibit was mostly pen and ink or charcoal, just occasional color. But it was pretty good, what there was.
Websites showing renovation of Centro Espanol de West Tampa:
windows
molding and exterior trimwork
Posted by Lucy D. Jones at 4/14/2008