A photograph of St. Petersburg's Christmas Tree going up in North Straub Park shortly after Thanksgiving this year, with the bay in the background: 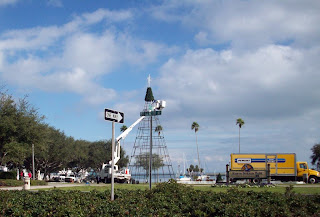 Part of waterfront holiday decorations and celebrations that included a Glice skating rink.