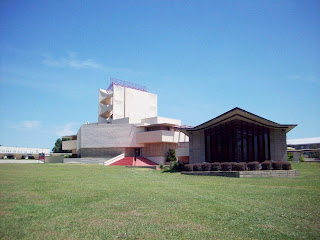 It's shameful. I've been living in Florida, studying its history and architecture for years and years and it wasn't until last month that I finally visited Florida Southern College's campus in Lakeland with its grand collection of Frank Lloyd Wright buildings.

The photograph above is of the William Danforth Chapel (front) and the Annie Pfeiffer Chapel. The original campus was in an orange grove on this hill overlooking Lake Hollingsworth, but the trees are gone now. Too bad, because the campus was glaring and hot even in April, especially with the concrete block buildings.

The Annie Pfeiffer Chapel was the first of Wright's buildings to be constructed at Florida Southern College. At its dedication, Annie Pfeiffer (wife of the founder of Pfeiffer Chemical Company) reportedly said, "They say it is finished," perhaps in reference to the metal bars forming a spire or steeple. Sometimes the chapel is referred to as "the bicycle rack." 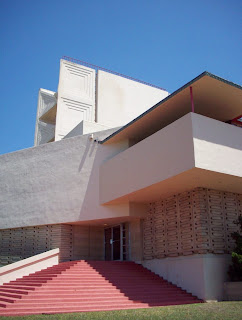 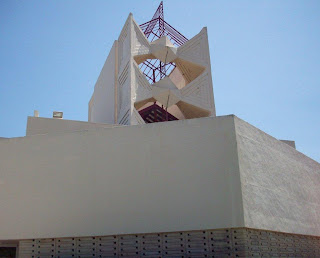 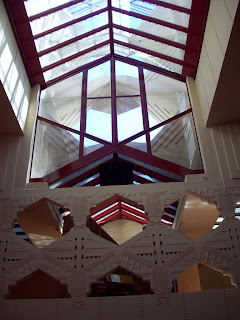 FSC students provided labor for the construction of the Frank Lloyd Wright buildings on campus, including this chapel. Natural light inside the chapel comes primarily from the large skylight above. The walls are made of a special concrete block called tapestry block. The tapestry blocks have small squares of colored glass embedded in them, creating moving spots of red, blue, and amber on a sunny day. 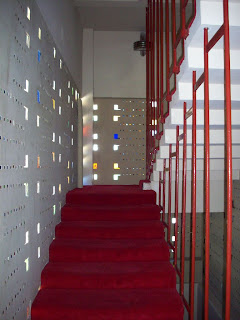 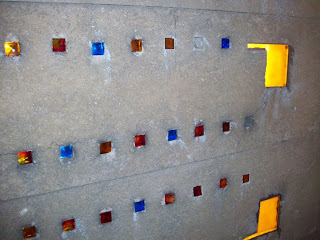 The book Buildings of Frank Lloyd Wright at Florida Southern College (Arcadia 2007) contains fascinating photographs of the chapel's construction and traces some of the changes in the building's interior and exterior over the years. Some of the major changes came after a 1944 hurricane shattered the skylight and parts of the building collapsed. During reconstruction the tapestry blocks above the first floor were stuccoed on the exterior to make them more weather proof.
Posted by Lucy D. Jones at 5/09/2009