Frank Lloyd Wright did not design every building now on the Florida Southern College campus. Nils Schweizer, a Frank Lloyd Wright protege, designed the college's current library. The E. T. Roux Library faces the Waterdome, and has some stylistic elements in common with the surrounding Wright buildings, such as the trim and horizontal lines. 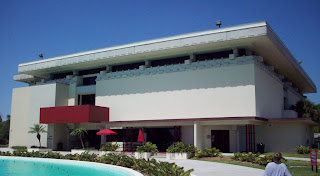 My FLW pilgrimage last month was spontaneous, absolutely without planning. We were on our way to St. Augustine for a spring break vacation and took a spur-of-the-moment right-hand turn at Lakeland. So after wandering around looking for the campus, then wandering around the campus looking for buildings of a certain appearance, we stumbled upon a parking lot by the chapels. From there, the Waterdome was pretty obvious, but the building behind it, I thought at first might be a Frank Lloyd Wright building, but then again.... So we went in and asked the student at the circulation desk, "Is this one of the Frank Lloyd Wright buildings?" "Huh?" Okay... good thing there was a stack of brochures and maps right there with a walking tour of the FLW buildings on campus. Thank you very much, and off we go.

Now, we still did not know that the library was by the above mentioned Nils Schweizer and that he had studied at Taliesin before coming to Lakeland and working on the Child of the Sun campus construction. Later, I learned that the Roux Library was finished in 1968, and that Schweizer had a successful career as an architect in Florida. The Nils M. Schweizer Fellows is a non-profit organization working to preserve mid-century modern architecture in Central Florida. 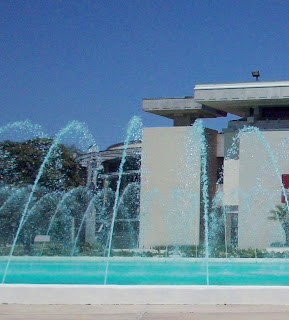 On the side of the Roux Library is the new Sarah D. and L. Kirk McKay, Jr. Archives Center, designed by Straughn Trout Architects and dedicated in February of 2009. Although obviously a 21st century design (click here for photographs), the archives builidng uses elements of the surrounding Frank Lloyd Wright buildings, such as the tapestry block, the rectangular cut-outs in the overhangs, and the round shape of the original E. T. Roux Library. 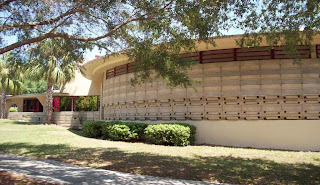 The original E. T. Roux Library? Oh yes, the one built by Frank Lloyd Wright. What was the campus library is now the Thad Buckner Building, and houses the Child of the Sun Visitor Center. Which is where if I had planned my trip, and had the visitor center been opened, I could have visited the gift shop and learned more about the very buildings I was there to see. The Buckner building was built during World War II - the students provided the construction labor, including the co-eds. It's interesting to compare photographs of construction of the Buckner Building with photographs of construction of the McKay Archives building, with their circular shapes. 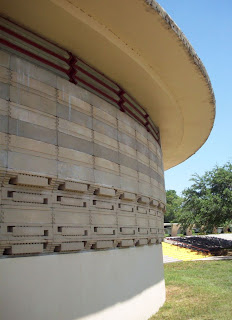 (The windows are quite unusual.)

And who was this E.T. Roux fellow? Edwin Timanus Roux was a Florida banker and businessman who was on the board for the college's early years. Before Florida Southern College came to Lakeland, an earlier campus burned. Roux helped the college find a temporary home in Clearwater Beach while new facilities were built on Lake Hollingsworth in 1922 (A Guide to Historic Lakeland by Steve Rajtar, The History Press, 2007).

Other buildings by Nils Schweizer
Posted by Lucy D. Jones at 5/12/2009