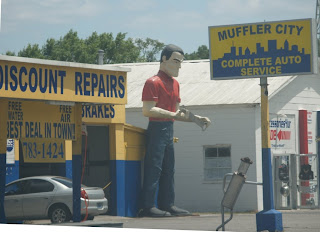 Highway giants are larger than life men, dinosaurs, elephants, large statues placed by the roadside to attract tourists and customers. Such giants are found across the nation, not just in Florida, but their fanstasical nature is well suited to our state.

Muffler men date to the 1960s and 1970s, and were large statues of men holding mufflers meant to advertise a muffler or auto repair shop. In Roadside Giants (Stackpole Books 2005), authors Brian and Sarah Butko explain that most muffler men were built by Prewitt Fiberglass of Venice, California. Later known as International Fiberglass, the company made unusually large statues of humans and animals up into the 1970s. Owners, particularly new owners, often give their muffler men new clothes and new items to hold, depending what is to be advertised.

The muffler man at Muffler City on Highway 301 in Zephyrhills is fairly traditional in his appearance and choice of accessory, a wrench. This shop has an example of another type of muffler man as well, the kind made out of old car parts - there he is, leaning against the sign post. Give him a wave next time you're passing by!