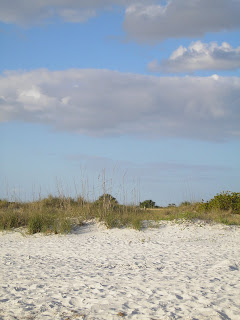 It's Spring Break around here, so we headed to Honeymoon Island for an afternoon at the beach. This is one of my favorite beaches -- it's clean, the sand is good, it's easy to get to, there's nature, it's quiet, has clean bathrooms, a snack bar,a gift shop, and convenient parking. If you want to ride your bike, the Pinellas Trail goes over the causeway to Honeymoon Island State Park. Once in the state park, you can ride a ferry over to Caladesi Island, the #2 beach in America for 2006, according to Dr. Beach.

In the 1880s, Caladesi and Honeymoon were both part of Hog Island, cleverly named so because of the hog farm there. In 1921, a hurricane cut Hog Island into two islands (separated by the cleverly named Hurricane Pass). But before long, someone put more effort into naming things out there on that Gulf barrier island. In the late 1930s, Clinton M. Washburn bought the property, and renamed it Honeymoon Island as a marketing ploy involving newlyweds and thatched beach huts.

For more information about the islands, the parks, and scheduled events, visit the State Parks' website or the website of the Friends of the Island Parks.
Posted by Lucy D. Jones at 3/22/2007