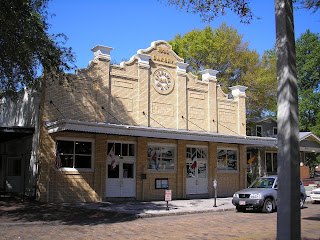 Ybor City is known for cigars, cigar factories, and the houses where cigar makers used to live. (It is also known for its nightlife, but that came later, after the factory town of Cuban, Spanish, Italian, Jewish, German immigrants faded.)

This afternoon we walked around Ybor, looking at the old buildings. Sure, we saw the factories and the mutual aid societies, but we also revisited the Ybor City Museum. This is a small but interesting musuem featuring many aspects of life in Ybor City, from church to bolita. The main museum building was originally the Ferlita Bakery. A historic marker in front of the museum tells something of the building's history:

"Francisco Ferlita, a native of Santo Stefano, Sicily, established a bakery on this site in 1896. Bread sold for three cents and five cents, and often on credit. In 1922, the wooden structure was destroyed by fire, and a yellow brick building was built around the remaining old red brick ovens. Ferlita died in 1931, and his five sons Stephen, Angelo, Joe, Tony and John continued making Cuban bread until 1973. At the peak of production, 35,000 loaves of Cuban bread were produced weekly."

In Tampa, Cuban bread is long and crusty, somewhat like a French baguette. Before baking, a piece of a palm frond is placed lengthwise on the loaf, creating a split top. This bread is ubiquitous, dunked in a cup of Cuban coffee or pressed into service as a Cuban sandwich. (The bread, the coffee, and the sandwich are popular topics for friendly discussions of whose is best and and the proper way to make them -- also comparisons between Tampa and Miami versions.)

When the Ferlita Bakery was built, fresh bread was delivered door-to-door once or twice a day. At the museum, you can visit a casita (a factory worker's house) and see the nail by the front door where the delivery boy would impale the morning's loaf. This is bread with some oomph.

Museum admission is $3, children 5 and under free. The garden courtyard is a popular spot for weddings, and the museum shop has its own separate building next door. If you go on a Sunday, you don't have to worry about quarters for the parking meter.
Posted by Lucy D. Jones at 3/25/2007