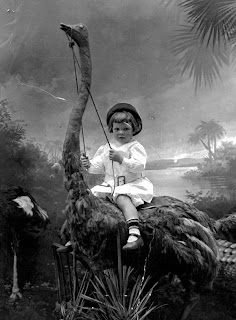 Every spring, the state legistlature meets to discuss the budget and taxes, and someone always mentions Florida's sales tax exemption for ostrich feed. In 1992, ostriches were reclassified as domestic livestock, and the tax exemption went into effect to support what was seen as an emerging industry in Florida. Starting in the late 1980s, ostrich was promoted as a low-fat, low-cholesterol beef alternative. Soon, ostrich farms were popping up all over the place. Unfortunately, demand did not follow and problems with slaughtering, marketing, and distributing kept ostrich product prices high. In the mid to late 1990s, most ostrich farms in Florida went out of business. The feed tax exemption stayed.

Ostrich farming was popular in Florida one hundred years ago, too. The first ostriches were brought to the United States in the late 1880s, and in the late 1890s the Florida Ostrich Farm opened in Jacksonville. While this was a tourist attraction featuring ostrich races, they also raised the large birds for their feathers. Depending on the color, length, and width, a single plume could cost as much as $40 (approximately $800 in today's dollars). The fluffy plumes were popular decorations for ladies hats, both in America and Europe. In addition to individual plumes, the Florida Ostrich Farm sold feather boas, stoles, and fans.

Ostrich farms were popular tourist destinations in Jacksonville well into the twentieth century, but other cities had them, too. There was a farm in St. Petersburg in the early part of the century, where the Wells family raced French ostriches and sold egg and plume souvenirs. Today, there are few ostrich farms operating in Florida. Bird races never really caught on and are seen locally only in old photographs and vintage postcards.

The American Ostrich Association has some interesting facts and figures available on its website -- for instance, did you know that an ostrich's brain is approximately the same size as its eyeball?