Just a few feet away from the war memorial in Miami's Bayfront Park is this marker in a patch of grass. 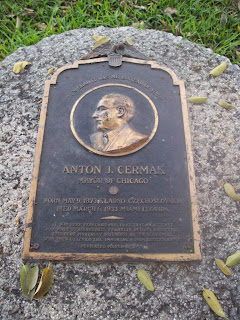 On February 15, 1933, President-Elect Franklin Delano Roosevelt spoke at Bayfront Park in Miami. In the crowd was Guiseppe Zangara, an Italian-born naturalized out-of-work bricklayer with anarchist tendencies. Zangara attended the rally with the intention of killing FDR, but he lost his balance at the crucial moment and ended up shooting Chicago Mayor Anton Cermak and four other people instead. Zangara was quickly arrested, and soon found guilty of assault and attempted murder. When Cermak died March 6, Zangara was found guilty of murder, and sentenced to death. Evidently the legal process was quite different then, as the execution took place March 20 at Raiford.

The University of Miami's Digital Library includes scanned FBI documents relating to the investigation of the assassination attempt. In a February 16, 1933, letter it is revealed that FDR was on Vincent Astor's yacht shortly before giving his speech in Bayfront Park.
Posted by Lucy D. Jones at 5/21/2008