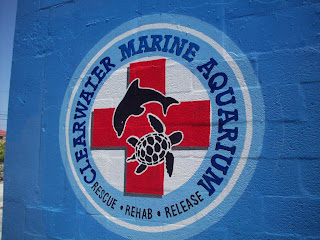 Clearwater Marine Aquarium, just over the Memorial Causeway Bridge (shown in the photo below, completed in 2005) from the mainland, is not as glossy as SeaWorld or the Florida Aquarium. The facility was converted from a sewage treatment plant in the 1970s, and that along with the large amounts of salt water and sea life contained within its concrete walls give it somewhat of a utilitarian air. The point of visiting here is to learn about sea life, not to admire architecture, although that does come into the story later on). The Aquarium's mission is to rescue marine animals, rehabilitate them, and release them back into their natural environments. Some animals cannot be returned to the wild because of injuries sustained, and they stay at the aquarium, becoming educational ambassadors. On the Aquarium's most famous residents is Winter, a young bottlenose dolphin who became entangled in a rope at a young age. The rope cut off the bolld supply to her tail. Now without a tail, she cannot swim as well as other dolphins. She captured national media attention when she received a prosthetic tail.
On a recent visit to the Clearwater Marine Aquarium, I did catch a glimpse of Winter, as well as several sea turtles, stingrays, sharks, and a sea otter. We also went on the aquarium's two-hour boat tour of Clearwater Bay, a nice trip for families, visitors, and all age groups. The trip is on a pontoon boat, with schedules stops to raise a crab trab and do some shelling on a spoil island. A couple of kids on the boat found sea urchins (reddish things in photo below), which they shared with the rest of the group. The tour guides/educators also run a seine net out, sampling underrwater life at different points in the bay. Creatures we all got to see included grunts, sea squirts, spider crabs, arrow crabs, tiny blue crabs, and bigger blue crabs. At one point a pod of six dolphins -- several of which were just youngsters -- lept beside the boat. 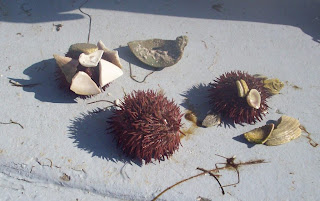 Along the way down the Intracoastal Waterway, the captain pointed out several houses on the shore, including Hulk Hogan's Swiss chalet-style mansion. Now, it's probably not a surprise to any of you, but I'm kind of a history geek, and I was a lot more interested in another house the captain mentioned. 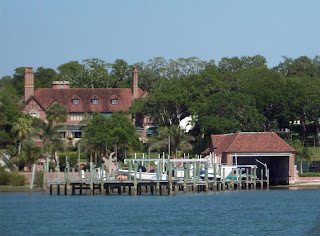 This is Spottis Woode, sometimes called Spotswood, Donald Roebling's waterfront estate. The captain mentioned that Donald Roebling was the grandson of the man who built the Brooklyn Bridge, but Donald is noteworthy based on his own acheivements.
In 1930, Donald Roebling bought this parcel of land in Clearwater, naming it honor of his finacee, Miss Spottiswoode. Roebling built a fabulous Tudor-style mansion, then added a machine shop to the estate. After the 1928 Lake Okeechobee hurricane, Roebling saw first hand how difficult rescue efforts had been. In his machine shop, he built the first prototypes of the Roebling Alligator, an amphibious tractor or tank. He repeated tried to get the military interested in his invention, but unsuccessfully so until the Alligator was featured in a 1937 issue of Life magazine. By 1940, Roebling was suppling the vehicles to the Marine Corps. The Alligator played an important role in the Pacific Theater during World War II, after being testing on the beaches of Clearwater Bay and the Gulf of Mexico.
For more information about Donald Roebling and the Roebling Alligator:
"Roebling's Amphibian The Origin Of The Assault Amphibian," by Richard W. Roan
"The Alligator Amphibian: A Historic Mechanical Engineering Landmark" (from the American Society of Mechanical Engineers, a pdf file, includes photographs)
Posted by Lucy D. Jones at 5/04/2008