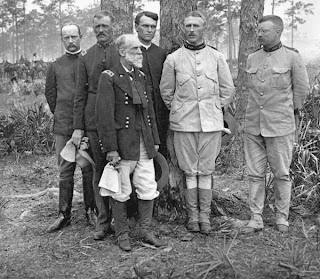 Theodore Rossevelt was born in New York on October 27, 1858, which means that today is his 150th birthday!

A few years before he became the 26th president of the United States, Roosevelt spent a little time in Tampa with his Rough Riders, the men of the First U.S. Volunteer Cavalry. The year was 1898 and the United States was at war with Spain. Tampa served as the point of embarkation, meaning that troops and supplies headed to Cuba passed through the city's ports. Tampa was still a small town, and the military logistics got gummed up, so there was time for Roosevelt to have dinner in Ybor City.

The Library of Congress website includes digital files of motion pictures taken of Roosevelt and the Rough Riders in Tampa.