A couple of weeks ago I pulled into my mother's driveway and noticed something laying on the concrete. At first I thought it was a unusually large earthworm, then perhaps a young snake. Carefully, I gave the snake a nudge with a stick, and indeed, it was deceased. Perhaps a lawnmower encounter. Not long ago we'd had to gently eject a young black racer the cat brought into our breakfast nook, but this driveway snake had spots, so that wasn't it.

Since the snake wasn't hurting anything, the question of its parentage became a mystery deferred. Until this week when Eva at The Flying Mullet wrote about her first encounter with a pygmy rattlesnake. Fortunately -for the snake - her story had a better ending. 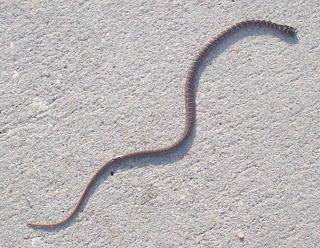