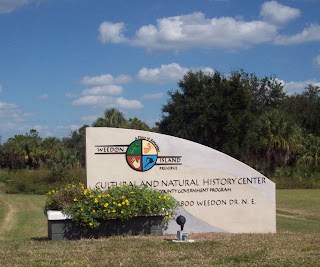 This week I took my class to the Weedon Island Preserve in St. Petersburg. The class is a seminar, an interdisciplinary overview of the Humanities with Florida as a unifying theme. My students are freshmen in the University Honors program at the University of South Florida, St. Petersburg. This fieldtrip to Weedon Island was a chance to escape the classroom for an afternoon, and a chance to visit a place that is both a valuable natural resource and a valuable cultural resource. The Preserve is managed by Pinellas County Parks, and offers nature trails, interpretative exhibits, historic sites, Indian mounds, kayaking, birdwatching, educational programs, and more. The design on the exterior of the museum is inspired by a prehistoric culture that flourished here a couple of thousand years ago, the Weeden Island culture, known for its elaborate pottery. This particular pattern would be Weeden Island Punctate, basically made by poking wet clay with the end of a reed or stem. The Weeden Island culture was found along the gulf coast from Tampa Bay northward and westward into southern Georgia and Alabama.

Jesse Fewkes of the Smithsonian Institution named the site and the culture in the 1920s when he excavated the site. He was also, unfortunately, responsible for a spelling error. Archaeologists refer to the Weeden Island culture and the Weeden Island site, and Weeden Island pottery. That's Weeden with three e's. But the name of the island is actually Weedon Island, with two e's and one o. Technically speaking, the island's name originally was Weedon's Island, with a possessive apostrophe s. In the 1890s the island was a wedding present to Blanche Henderson and Leslie Weedon, a Tampa physician. The couple and their family used the island as a weekend retreat. A twist to the story is that Leslie Weedon was the grandson of Frederick Weedon, known to historians as the doctor to Osceola while the Seminole leader was imprisioned in St. Augustine. When Osceola died, Dr. F. Weedon prepared his body for burial, but for some reason kept Osceola's head separate.