Beside the winding road leading to the Weedon Island Preserve are two grave markers partially surrounded by a short, white picket fence. There's space for a car to pull over safely, and a interpretive sign to read as well. 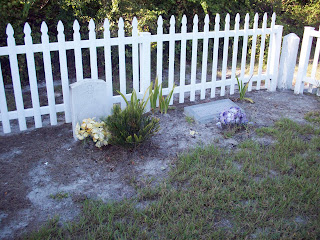 Here are the graves of Lorenzo Dow Ross and his eldest son Percy. Lorenzo was born in 1836 in what became Tampa. A local boy, he fought in Florida's Indian wars and joined the Confederate Seventh Florida Infantry during the Civil War. After nearly two years as a prisoner of war in Tennessee, he came home to Ross Island, now part of the Weedon Island Preserve. Bad food killed Lorenzo in 1889, bad hunting killed Percy in 1886, and they came to be buried side by side.

Lorenzo and Percy Ross' tombstones have had some adventures, which you can read about in these articles from the St. Petersburg Times: